Jaipur Pink Panthers: The team is currently placed at seventh position in the points table. They were once the table-toppers but as they are losing the matches in successions, they are slipping down in the points table. The last match they played against Haryana Steelers it ended on the tie as the scorecard read 32:32. The good thing about the team is the return of skipper Deepak Hooda’s form. He was the top scorer of the side with 14 Points. His teammate Sandeep Kumar Dhull accompanied him as he scored 5 points in that game. Owing to their domination and win against Patna Pirates when they met previously in the tournament, Pink Panther would hope to beat them again today.

Patna Pirates: After a streak of 6 back to back losses in the tournament, Patna Pirates finally bounced back with a commanding win over Tamil Thalaivas. As the scorecard read 51:25, Patna Pirates skipper Pardeep Narwal showed his might yet again on the mat. He scored a humongous 26 Points in the match and also crossed 1000 raid points in the Pro Kabaddi League. The reliable defender Jaideep scored 7 Points as he proved again why he is an essential player for the side.  Having lost their home leg game against Jaipur Pink Panthers earlier this season, beating the Jaipur side would be a primacy for them.

JAI vs PAT Broadcast Details: The Kabaddi match between Jaipur Pink Panthers and Patna Pirates will be telecasted across the Star Sports Network in multiple languages. Live Score updates and live stream will be available on Hotstar.

Jaipur Pink Panthers
Deepak Niwas Hooda – The skipper who lost his form in between the tournament bounced back in the last game. He is one of the mains of the team as has scored 102 points in 14 games and he has reached the milestone of 100 points in this season.
Sandeep Dhull – The inventive defender leads the defensive department of the team. He tends to soak in the pressure during the course of the game. He has 50 points in 14 games as he continues to induce his side for winning the games.

Patna Pirates
Pardeep Narwal – The captain of the team makes sure that the point-scoring does not stop for his team. He is the key player of his side looking at his remarkable performance in this season. He has scored 158 points in 14 games for his team. He also has 8 Super 10s this season as his dominance continues.
Jaideep – The well-knit defender is a reliable player for his side when it comes to leading the defense department. So far he has scored 38 points in 14 games and finds himself an automatic inclusion in the team. 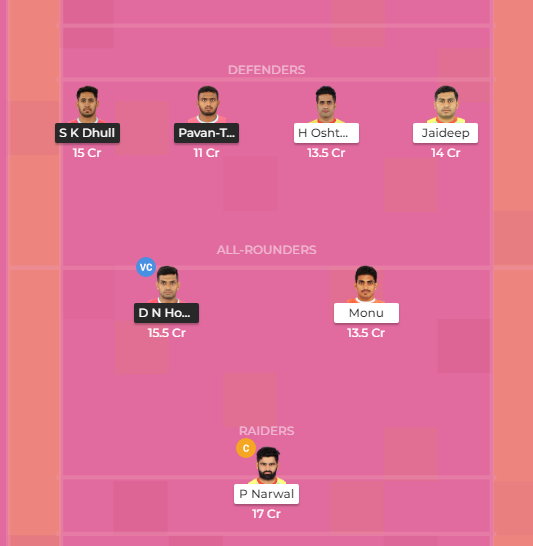 Catch all the live updates of JAI vs PAT Kabaddi Match, including live scores and match report. This time JAI vs PAT Dream11 Prediction will depend on the final team line-ups.