PAT vs HAR Dream11 Match Prediction, Live Score & Team
Patna Pirates will invite Haryana Steelers next, in what will be their second match of the day. Patna Pirates have lost both their home games thus far and would be looking to put that to rest and make the most of Haryana’s poor form. As for the Steelers, they have won just one of their 4 games, and have lost the last three in succession. They are craving for a win more than ever.

It would make for a nail-biting contest.

PAT vs HAR Match Timing & Match Details
The kabaddi match between Patna Pirates and Haryana Steelers will be played at the Patliputra Sports Complex on 7th August 2019 at 8:30 PM IST.

PAT vs HAR Broadcast Details
The kabaddi match between Patna Pirates and Haryana Steelers will be telecasted across Star Sports Network in multiple languages. Live Score updates and live stream will be available on Hotstar.

Patna Pirates-
Pardeep Narwal: The Dubki King has been the top-scoring raider across all season of Pro Kabaddi. He didn’t have the best of starts in Pro Kabaddi 2019, but seems to have got his touch back in the home leg. He was sensational against Jaipur Pink Panthers and then did well against Puneri Paltan, scoring 9 and 6 points respectively. He now has 33 points in the 5 matches thus far.

Jaideep: He has been Pirates’ best defender. He is the third highest scoring defender thus far in Pro Kabaddi 2019 with 19 points in 5 games.

Monu: He has been the super-sub for Patna and has been their x-factor. He contributes in both departments and has scored crucial points for his side. He has a total of 17 points, which includes 10 tackle points and 7 raid points in only 5 substitute appearances.

Haryana Steelers-
Vikash Khandola: He made a dramatic maiden appearance this season in the last game, scoring 7 game points. He will set his eyes on a repeat performance.

Sunil: In just 2 games thus far, he has scored 8 points and set a benchmark for fellow defenders. The right-corner defender would be looking to score more of those tackles against Patna Pirates.

Naveen: He has the best Steelers player thus far. He has scored 29 points in 4 matches thus far. 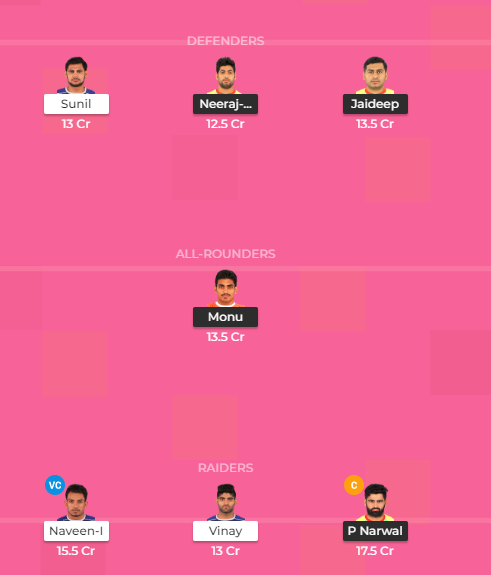 Catch all the live updates of PAT vs HAR Pro Kabaddi match, including live scores and match report. This time PAT vs HAR Dream11 Prediction will depend on the final team line-ups.