PAK-ET vs AFGH-ET Dream11 Prediction: ACC Emerging Asia Cup 2019 will have four games on Day-01 and the 2nd game will be played between Pakistan and Afghanistan. Pakistan were the semi-finalist of the last edition and lost to India in the SF. Both teams are in Group A alongside Sri Lanka and Oman. Saud Shakeel will lead Pakistan side and they have called up young players in the squad. Pak have called up 2-3 players from National T20 Cup and Quaid-E-Azam trophy.

On the other side, Afghanistan will be led by Samiullah Shinwari who has also represented his national side in ODI and T20Is. Afghanistan have also included few players from Shpageeza Cricket League. Afghanistan can surprise Pakistan but on paper, Pakistan look favourites.

Pakistan Emerging and Afghanistan Emerging game will be played at Sheikh Kamal International Cricket Stadium Academy Ground, Cox’s Bazar. The ground is hosting all the matches of Group A. It will be a different track and the match will be played on the unused surface. There are some cracks on track. The toss will decide the match as batting second will be helpful.

Pakistan Emerging and Afghanistan Emerging game will not be telecasted on any platform. The live stream might be available on YouTube or Fan Code App.

Khushdil Shah is an-rounder and recently played in Australia T20 series. Khushdil also played in the previous edition of Emerging Asia Cup where he scored one half-century and picked 4 wickets.

Mohammad Hasnain will be the leading bowler for Pakistan as he made his international debut this year and also picked hat trick against Sri Lanka. He picked 9 wickets in National T20 Cup at an average of 18.22.

Samiullah Shinwari is the captain and the only player who had represented Afghanistan on an international level. He played 84 ODIs and scored 1811 runs with 11 half-centuries.

Shawkat Zaman has good record in List-A. His average is 42 in List-A cricket. He recently participated in Shpageeza Cricket League. He has a defensive approach which is the effective thing in this format. 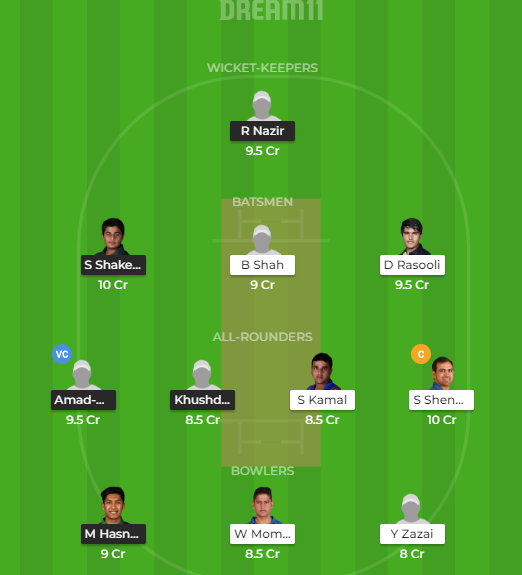