Nelson Mandela Bay Giants suffered their first defeat against Paarl Rocks. Before this defeat, they won four consecutive matches. Their one game was washed out. Giants are at number two on the table. In the last game, they were good against Durban Heat. JJ Smuts’ 37-balls 54 helped Bay Giants post 173. Lubbe’s attacking ability spoilt Bay Giants’ chance of grabbing the first spot.

Table topper Tshwane Spartans have been terrific form, displaying stellar performances. They won three games and their three games were washed out. In the last game, they beat Paarl Rocks by 8 wickets. After batting first, Paarl Rocks were bowled out on just 126 and Spartans chased down the target in 15-overs with 8-wickets in hand. AB De Villiers scored 69 on just 37 balls and RVD Merwe picked 3-wickets for Spartans.

Mandela Bay Giants and Tshwane Spartans game will be played at St. George’s Park, Port Elizabeth. The surface is a decent track and as per the previous game, the track is slightly slow. Pacers can also get help from the pitch. There is cloudy weather in Port Elizabeth but rain is not predicted. Chasing will be preferred by the captain after winning the toss.

J J Smuts is the leading run-scorer for Bay Giants. He has scored 205 runs in 6 innings at an average of 41. In the previous game, he scored 54 off 37 balls against Durban Heat. He has scored two half-centuries so far. He has also picked 4 wickets.

Imran Tahir is a quality spinner and he has contributed very well. He has picked 9 wickets with an impressive economy of below 6. He picked 3-wickets haul against Jozi Stars.

Dean Elgar is the leading run-scorer for Spartans. He has scored 175 runs in 5 innings at an average of 81.50. He scored two half-centuries and his consistency is amazing.

AB de Villiers got his form as he scored two back to back half-centuries. He scored that one knock in the last game. He scored unbeaten 69 on just 37 balls in the previous encounter against Paarl Rocks. He has scored 169 runs in 5 innings at an average of 51. 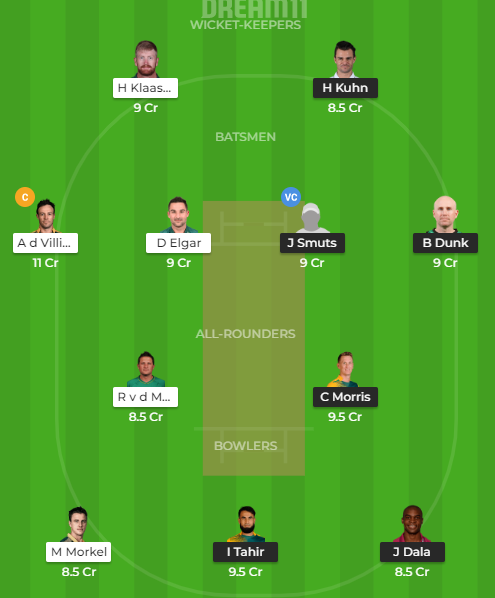