MUM vs GUJ Dream11 Prediction: Match 22 of the VIVO Pro Kabaddi League will see U Mumba host last year’s runners-up Gujarat Fortunegiants at Sardar Vallabhai Patel Indoor Stadium, Mumbai. The last time both teams played each other, U Mumba got the better of their counterparts Gujarat Fortunegiants.

U Mumba has had a topsy-turvy league thus far, winning 2 of their 5 games, and haven’t looked at their best. Their defence has clicked on one of the games, while their raiding did the talking in the other win and they have failed to gel as a unit. Abhishek Singh has been the star of the show for U Mumba, leading the raiding department for the Mumbai outfit, scoring 30 points in 5 games. Surender Singh has been the pick of the defenders, while Fazel Atrachali has been decent too. They have scored 15 and 13 points respectively. The team would need to hit the Fortunegiants as a unit if they are to even compete against them.

Gujarat Fortunegiants, on the contrary, has had a terrific start to the season as they comfortably beat the defending champions Bengaluru Bulls in their season opener and then came hard at UP Yoddha to hand them a hefty defeat. They also beat Dabang Delhi to end their unbeaten run. They look dangerous as all the players are in good form and have also performed well in the last couple of matches. Raider GB More has been brilliant, adding to the defensive side as well, while Rohit Guliya has been exceptional too. The defence has stood tall in the presence of Sunil Kumar and Pawan Bhainswal.

MUM vs GUJ Match Timing and Match Details: The kabaddi match between U Mumba and Gujarat Fortunegiants will be played at the Sardar Vallabhai Patel Indoor Stadium on 2nd August 2019 at 8:30 PM IST.

MUM vs GUJ Broadcast Details: The kabaddi match between U Mumba and Gujarat Fortunegiants will be telecasted on Star Sports Network. Live Score updates and live stream will be available on Hotstar.

U Mumba Top Players:
Abhishek Singh – He has been the mainstay of U Mumba’s raiding department and a star for them this season, having played a big hand. He has scored 30 raid points in 5 games at an average of 6 points per game, which is phenomenal.
Surender Singh – The right cover defender has outshone captain Atrachali and has claimed 15 points in the 5 games. He has been phenomenal with his tackles, and his confidence is only rising.
Fazel Atrachali – The captain of the side, leads from the front and bounced back strongly after a defeat in the second game, where the defence was an issue. He worked on it with his team, leading them to success in the next game. He has scored 13 points in total, including a rare raid point.

Gujarat Fortunegiants Top Players:
Sachin Tanwar – He is a prolific raider and has been a consistent performer for the side. He top-scored for the side with 7 points in the first game against the Bengaluru Bulls. He then got another 5 and 4 in the next two games to walk away with a tally of 16 points in 3 matches.
GB More –  With 11 raid points and 9 tackle points, the raider has outdone his expectations and emerged as the real all-rounder in the side. He would pose a threat to U Mumba with both, his raiding, and tackling.
Rohit Guliya – The all-rounder has been phenomenal on either side of the mat and has forced Sachin to play second fiddle to him. He has 20 raid points in 3 games, and has another 2 from his tackles, and will be a key player for the match. 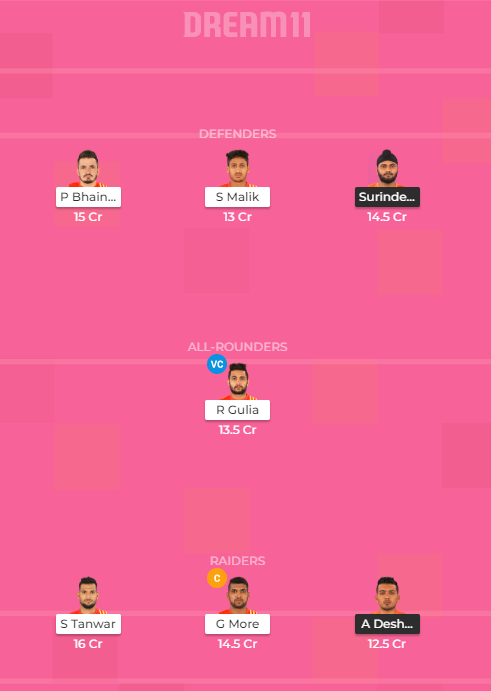 Catch all the live updates of MUM vs GUJ Kabaddi Match, including live scores and match report. This time MUM vs GUJ Dream11 Prediction will depend on the final team line-ups.