LIV vs NAP Dream11 Prediction: Defending European Champions Liverpool will take on Napoli in the opening game of the League. Liverpool has been one of the teams to beat currently with the kind of talent they possess and it will take some strong play from Napoli to beat this side. Napoli too has been in good form in this season and it will be interesting to see how they turn up for this game.

LIV vs NAP Match timings & Details: The match is scheduled to start at 12:30 AM IST, on 18th September 2019. The match will be played at Stadio San Paolo, home of Napoli.

LIV vs NAP Broadcast Details: The match will be telecasted by Sony Network and can also be viewed on Sony LIV app.

Liverpool
Mohamed Salah – Another season and another fine start for the Egyptian. He has found the net 4 times in as many matches and has made 2 assist as well. He will once again be leading the attack but this time to defend the title.
Virgil van Dijk – The Dutch defender is not just a key at the back but is also a good option during the set pieces and has a strong header as well. He has scored 1 goal in this season.

Napoli
Lorenzo Insigne – The 28-year-old striker and captain of Napoli have been in fine touch this season. The experienced forward has contributed to 4 goals in the domestic circuit.
Kalidou Koulibaly – the center back will be shouldering a lot of responsibilities upon himself with the kind of standard he has set at the back. He will be the key player for the team. 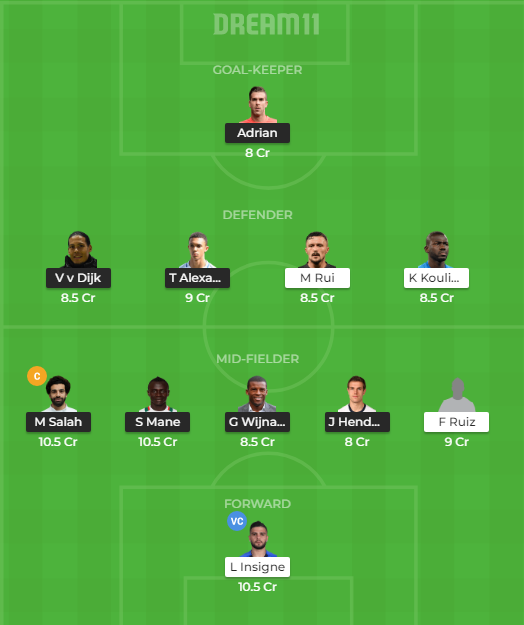 Catch all the live updates of LIV vs NAP Football Match, including live scores and match report. This time LIV vs NAP Dream11 Prediction will depend on the final team line-ups.