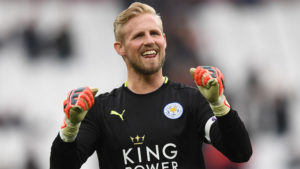 Leicester City goalkeeper didn’t like the fact that his counterpart, David de Gea has been facing harsh criticism at the moment. The latter came into limelight after committing errors that contributed to the loss of Manchester United and eventually losing the FA cup.


Leicester City is set to play against the United on Sunday with both sides chasing the top four spots. Goal-keeper has defended the Spaniard, saying that that kind of scrutiny he is getting is harsh.

“Goalkeepers are going to get scrutinized,” Schmeichel said. He added on BBC Radio 5 Live: “For me, the important thing is context. The kind of scrutiny that he’s getting at the moment is very harsh.”

The reason why the Spaniard goalkeeper is facing the criticism at the moment is that he could not stop Blues striker Olivier Giroud’s opener as well as he was clumsy on the field and committed several unusual mistakes.

Schmeichel was also not happy with the fact that his counterpart is getting judged by even those people who have not played at that position during their careers.

“There are no goalkeepers analyzing on TV or in papers so I feel the criticism he gets is very unfair,” he added.

“They’ll go into deep technical things which, with the greatest respect, they don’t actually know the truth.

“To just hammer someone the way he sometimes does get hammered, I find is unfair.” He concluded.

David de Gea is also regarded as one of the best goalkeepers in the world and also plays for the Spain national team. He was also the captain of Spain under 21 team who won the European Championship in 2011 and 2013 and competed in the 2012 Summer Olympics.