With 5 wins and 2 losses in a total of seven matches, Los Angeles Clippers are placed at the fourth place in the Western Conference. They had a triumphant outing against Utah Jazz after they defeated the side by 105-94. The Clippers currently average 112 points per game, which is 13th in the league overall.

The Milwaukee Bucks have won 3 straight games and are 5-2 in the total of seven matches they have played till now. Having won 5 matches and lost 2 games, Milwaukee Bucks stand fourth in the Eastern Conference. The Bucks have the best offense in the NBA this season, averaging 121 points per game.

They shoot a league-high 48 percent from the field and 35 percent from three-point range, which is 12th. They are also first in rebounds with 51 per game and 6th in assists with 26 per game.

Also, they are 6th in turnovers with 14 per game. They allow 110 points per game and are 17th in the overall list in the defense. They had a terrific outing in the last game against Minnesota Timberwolves as they crushed them by 134-106.

The match between Los Angeles Clippers vs Milwaukee Bucks will be played at the venue Staples Center, Downtown Los Angeles. The Arena can hold around 21,000 spectators.

The match between Los Angeles Clippers vs Milwaukee Bucks will start at 8:30 AM IST on November 7, 2019, Thursday.

The match between Los Angeles Clippers vs Milwaukee Bucks will be telecasted in India on the Sony Sports Network. You can also watch it online on the SonyLIV app. Live Score & Streaming will also be available on the NBA official website.

Los Angeles Clippers: Team’s Small Forward player Kawhi Leonard won’t be a part of the playing squad as he is being rested after he sustained an injury. Another Small Forward player Paul George might play this game as he has almost recovered from his injury and returned to training last week.

Milwaukee Bucks: No update of any injury or suspension has from the side as they fly to Los Angeles. 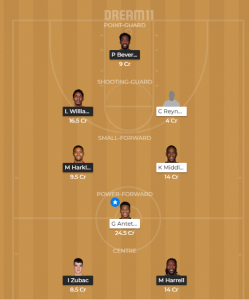