JUV vs MIL Dream11 Prediction: The two traditional powerhouses of Italy will meet for the 12th Match of the season. Both the teams would be desperate for the win going into the game. A loss for either of the group could be costly for the respective teams.

The current Italian champions will be desperate for the win against the Milan side. The Juventus is facing resistance in the race to the title this year from Inter Milan. A loss against Milan could push two points behind the table topper Inter whereas a win would make them regain the top spot on the table. Juventus has 29 points in the 11 games. The team has nine wins and two draws. However, a lack of goals seems a concern for the Turin team. They have managed just 19 goals in the season.

AC Milan is struggling once again in the season. The team is lacking a real star and is struggling in all the departments. However, there have been signs of improvement for the Milan based team. Milan would look to win the game and put some authority in the league again. AC Milan is currently hovering in the bottom half of the table with 13 points in 11 games. Milan has managed just 11 goals in 11 games.

The Match between Juventus and AC Milan will be played out at Allianz Stadium. The Match will start at 1:15 AM on 11th November 2019, according to IST.

The broadcasting rights of Serie A lies with the Sony Network in India. The matches can be viewed using the TV channels of the Sony Ten network. The games can be streamed live on the internet using the Digital channel of Sony Ten, Sony LIV.

C Ronaldo: The Portuguese star is the man to watch in the Juventus camp. The striker can be deadly in any situation. He has scored five goals and provided in one assist in nine games.

M Pjanic: The midfielder can provide defence-splitting passes. He has produced three goals and one assist in nine games. The player is going to be instrumental in the game for Juventus.

Theo Hernandez: The left-back is one of the players who have performed well for the Milan team. He has troubled defence with his crosses and overlapping runs. He has made seven starts and scored two goals and provided one assist. 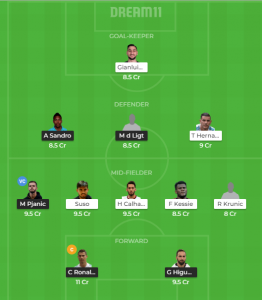