JAI vs PUN Dream11 Prediction: Jaipur Pink Panthers will be back in action after long to face a resurgent Puneri Paltan side at the EKA Arena by TransStadia, Ahmedabad on the eve of Independence Day and Rakhi.

Jaipur Pink Panthers have played the fewest matches in the league thus far, and yet find themselves at the 5th spot, while Puneri Paltan is bottom despite 2 wins in their last 3 matches.

Jaipur Pink Panthers have lost just one game thus far and have been phenomenal. The likes of Deepak Niwas Hooda, Deepak Narwal and Sandeep Kumar Dhull have been sensational.

For Puneri Paltan, young Pankaj Mohite has been the x-factor and the return of Nitin Tomar would certainly put them in much better stead.

JAI vs PUN Match Timing & Match Details: Jaipur Pink Panthers vs Puneri Paltan match will be played on 15th August 2019 at 7:30 PM at the EKA Arena by TransStadia.

JAI vs PUN Broadcast Details: Jaipur Pink Panthers vs Puneri Paltan match will be telecasted in Hindi, English and other regional languages on the Star Sports Network. Live score updates and live stream is available on Prokabaddi.com and Hotstar respectively.

Jaipur Pink Panthers Top Players:
Deepak Niwas Hooda – The captain has led from the front and played a key role yet again this season. He has had his hand in all of Pink Panthers’ wins this year. He has earned a total of 43 points in 5 games with 41 raid points and 2 tackle points.
Sandeep Kumar Dhull – He has been among the best-left corner defenders in the league this season. He has earned 23 tackle points this season, with the best average among all defenders.
Deepak Narwal – He has been sensational in supporting Deepak Niwas Hooda and taking the pressure off hi in crunch situations. He has a total of 25 points thus far with 24 raid points and a solitary tackle point.

Puneri Paltan Top Players:
Nitin Tomar –  His return is a very positive sign for the Paltan and Anup Kumar would be happy his best raider is back in action. He made his maiden Season 7 appearance against Dabang Delhi and was the team’s standout performer. He got 8 points in that match.
Pankaj Mohite – He has been the team’s surprise package and has earned 24 points in just the 4 matches played, and has been one of the primary reasons of the team’s victories lately. He was the raider of the match against Patna Pirates
Manjeet – He has upped his game in the last couple of matches. After a rather disappointing show, Manjeet crawled his way back and was a contributor to the wins against the Patna Pirates and Gujarat Fortunegiants. He has 28 points to his name in 6 matches with 16 raid and 12 tackle points. 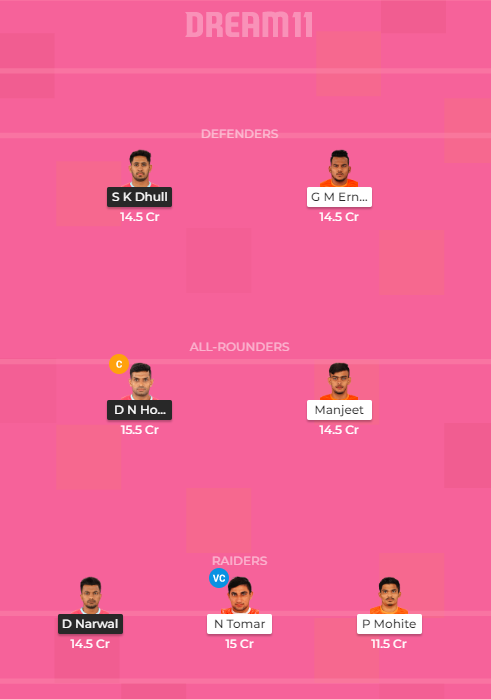 Catch all the live updates of JAI vs PUN Kabaddi Match, including live scores and match report. This time JAI vs PUN Dream11 Match Prediction will depend on the final team line-ups.