Rahul Dravid 233 in Adelaide:- Some 18 years back, team India was playing a series decider match in Adelaide, where Australia posted a mammoth target of 556 in the first innings. Ricky Ponting was in sublime form, scoring a century in almost every match. He juggernaut 242 had blown away the Indian pace attack, things looked dull for India. 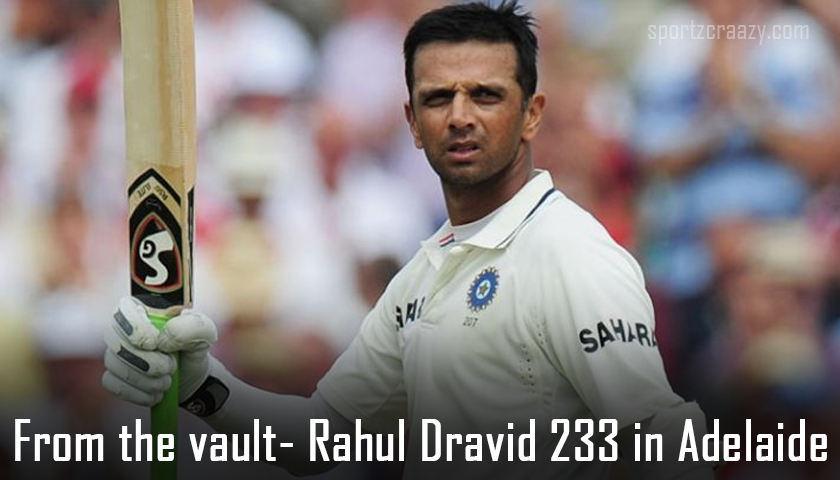 Rahul Dravid 233 in Adelaide:- The Australian pace attack included Jason Gillespie, Brad Williams, Stuart MacGill, and Andy Bichel. The Indian team was on knees at 85/4, fans expected marathon innings from the likes of Rahul Dravid and VVS Laxman followed by the tail.


Rahul Dravid handled the early blows from the Aussies and started grinding the bowling once settled. The moisture from the pitch soon evaporated and the ball started coming onto the bat giving Rahul Dravid the opportunity to build a long partnership.

Those who witnessed the innings with naked eyes labeled it as the greatest overseas knock by Dravid. The way duo handled the pressure and kept rotating the strike reminded fans of historical Kolkata test (2001). Laxman too joined the party and scored a massive knock of 148. The marathon 303 runs union made them the first batting pair to post 250 plus partnership against Australia in test cricket.

Rahul Dravid 233 in Adelaide:- They spend more than 10 hours together at the crease and took India to 523 with a deficit of only 33 runs. In the process, Rahul Dravid scored his fourth double ton in test cricket. It was the time for Indian seamers to deliver, bowling spearhead Ajit Agarkar tumbled the Australia batting order and wrapped them on just 196. He took his career best of 6-41 giving India a chasable target of 230.

The Indian openers again chipped in with crucial knocks, but couldn’t convert the start into big scores, again it was Rahul Dravid, who scored unbeaten 72 and took India behind victory lines giving India overall fourth test win on Australian soil.

Cheteshwar Pujara heroic innings of 123 remind of Rahul 23, he stepped in when the chips were down and by the end of the day, India easily crossed the 250 runs barrier. The Adelaide test wicket offers both swing and bounces during the first two hours and then flattens. The run making becomes an easy afternoon. During the time of disguise, Indian team can rewind the old winning memory and take a leaf out of them.