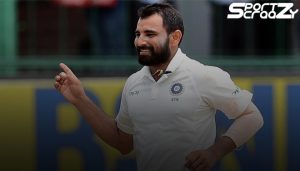 Mohammed Shami continued his outstanding form with the ball at the Holkar Stadium and made a massive impact in Bangladesh’s second innings. His 4-fer ensured India sent Bangladesh packing on the third day of the game itself.

India were 6 for 493 at stumps on day 2 and the the Indian skipper Virat Kohli declared overnight as the Indian management was of the view that the lead they had secured was enough to win the game.


They proved to be absolutely right as the Indian bowlers found impeccable line and length right from the very start of the day.

Although, there was a bit of fight shown by Musfiqur and a couple of other lower order Bangladesh batsmen, the visitors couldn’t survive the day eventually.

Mohammed Shami wasn’t given the new ball, but as he came into the attack first change, he delivered in his very first over by dismissing the Bangladesh skipper Mominul Haque. It was initially adjudged not out by the on-field umpire, but the decision was overturned after it was sent upstairs by Virat Kohli.

Shami created trouble for the Bangladeshis both from the full as well as short length. He was able to nibble the ball a little bit both ways when he bowled full and the batsmen were always tentative coming forward to him. And when he dragged his length down, his pace was just too much for the batsmen to handle.

The dismissal of Mohammad Mithun was a classic example of that. It was a short delivery and Mithun transferred his weight onto the backfoot for the pull, but the ball came way too early than he thought it would. Mithun couldn’t get it anywhere the near the middle of the bat and was caught at short-midwicket.

Apart from Shami, Ravichandran Ashwin also registered a 3-wicket hall as Bangladesh was bowled out for 213.