CRY vs EVE Dream11 Match Prediction, Live Score & Probable 11
Everton will take on Crystal Palace at their home ground Selhurst Park on 10th August 2019. Looking at the last season, Everton finished 8th, missing their Europa League Qualifier chances by a whisker. Out of a total of 38 matches they played, the Toffees won 15, lost 14, while the 9 of their matches resulted in a draw.

Crystal Palace, on the other hand, finished 12th in the league despite a horror start. The Eagles started peaking only near the end of the season, but it was all too little, too late by then. They won 3 of their last matches and lost just the one game. Over the course of the season, they won 14, lost 17, and 7 of their remaining games of the total of 38, resulted in a draw.

CRY vs EVE Match Timings and Match Details
The match will kick off at 7:30 PM IST, 10th August 2019. The match will be played at Crystal Palace’s home ground, Selhurst Park.

Wilfried Zaha:  The left-winger from Cote D’Ivoire was among the strongest pillars of Crystal Palace last season with 10 goals to his name. Although, he is still a subject of transfer speculation, but will be a key player if he stays put.

Everton Key Players
Richarlison: He was one of the most successful player for Everton last season, scoring 13 goals and adding 1 assist to his name.

Gylfi Sigurdsson: He was the star performer for Everton last season with 13 goals and 6 assists to his name. He raised the bar for the Toffees.

Moise Kean: The new signing will be a threat for the opposition. He scored 6 goals last season for Juventus in 13 games and would look to fulfill the promise made to the fans of repaying their faith and respect on the field. 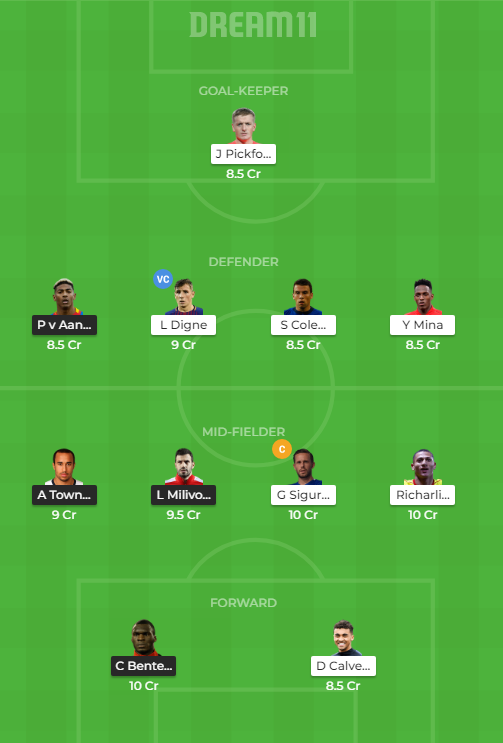 Catch all the live updates of CRY vs EVE Football match, including live scores and match report. This time CRY VS EVE Dream11 Prediction will depend on the final team line-ups.