BKN vs MIA Dream11 Prediction: The Eastern Conference basketball match of the NBA 2019-20 regular season will be the played between the Brooklyn Nets vs Miami Heat in the home arena of the Brooklyn on Monday. Both the teams have been very competitive as their last five encounters have yielded them 2 wins each and 1 match ending in a tie.

Brooklyn won for the fifth time in six games as they earned a split of their home and home set with the Celtics by prevailing at the Barclays Center in their last contest. The Nets entered Saturday fourth in the Atlantic Division, 4.5 games behind Toronto for the top spot in the division.

The Nets enter this contest 11th in the league by averaging 112.5 points per game on the year. Brooklyn is eighth in the league in rebounding by pulling down 46.7 boards a night while they are 17th by dishing out 23.8 assists per game.

The Nets are a dismal 21st in scoring defense as they allow 113.9 points per game this year. Kyrie Irving leads the team with 28.5 points, 5.4 rebounds, and 7.2 assists a night on the season. Caris LeVert chips in 16.8 points per contest while Spencer Dinwiddie contributes 20.2 points and 5.9 assists a game.

Joe Harris (14.1 points) and Taurean Prince (13.2 points, 5.9 rebounds) are solid contributors while Jarrett Allen (11.9 points, 10.4 rebounds) is starting to wrest time away from DeAndre Jordan. Brooklyn is tied for 19th in field goal percentage by shooting 45 percent from the field as a team this season.

The Nets are 6th in threes per game by knocking down 13.2 triples per contest while ranking tied for 19th in the league by hitting 34.9 percent. They have a good chance of giving the Heat a shocker.

The Miami Heat are on the road for a matchup with the Brooklyn Nets.  The Heat are (13-5), coming off a 122-105 win over the Golden State Warriors. Miami bounced back from their loss to the Rockets as they downed Golden State for their seventh win in their last nine games.

The Heat enters this one tied for 13th in the league in scoring offense with 111.5 points per game this season. Miami is 20th in the league in rebounding with 44.2 boards a contest while the team stands 7th in assists by dishing out 25.5 dimes a night.

The Heats have a 50-50 record in their road games which they would like to improve in this contest.

The basketball match between Brooklyn Nets vs Miami Heat will be played at the venue Barclays Centre, in Brooklyn, New York. The Arena has the capacity to hold around 19,000 spectators.

The basketball match between Brooklyn Nets vs Miami Heat will start at 1:30 AM IST on December 2, 2019, Monday.

The basketball match between Brooklyn Nets vs Miami Heat will be telecasted in India on the Sony Sports Network. You can also watch it online on the SonyLIV app. Live Scores & Streaming will also be available on the NBA official website.

Brooklyn Nets: Kevin Durant is out for the whole season due to his Achilles tendon. Caris LeVert will be out until December 14 due to his thumb injury while Kyrie Irving has been sidelined until December 4 due to shoulder injury.

Miami Heat: KZ Okpala (Achilles Tendon) and Derrick Jones Jr. (hip injury) have been listed day-to-day and will be decided just before the game. 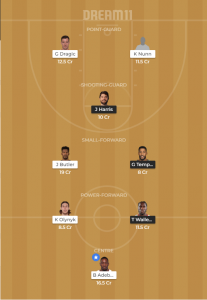