BAR vs VAL Dream11 Prediction: In the next match of La Liga, Barcelona will be hosting Valencia at their home. Both the teams have started off the season on a very similar note with both teams facing all the 3 results in the first 3 games of the season. Barcelona is currently at 8th position while Valencia at 10th spot. With both wanting to get a move on, this match could turn up to be an interesting encounter.

BAR vs OSN Match Timings & Details: The match is scheduled to start at 12:30 PM IST, on 15th September 2019. The match will be played at Camp Nou, home of Barcelona.

BAR vs VAL Broadcast Details: La Liga will be streamed on Facebook. Live score updates are available on the official website- https://www.laliga.com/en-GB

Barcelona
Antoine Griezmann – the Frenchman has proved to be an outstanding transfer for the club. He has started off the season scoring 2 goals in 3 appearances and has even made 1 assist.
Sergi Roberto – The defensive midfielder has a good sense of passing and moving the ball. He has made 2 assists this season so far.

Valencia
Daniel Parejo – the midfielder has found the back of the net 2 times in 2 appearances so far. Apart from his contributions in front, he also has good defensive skills.
Kevin Gameiro – the 32-year-old experienced forward is one of the key players of the team. He has a good game sense which helps in the buildup play. 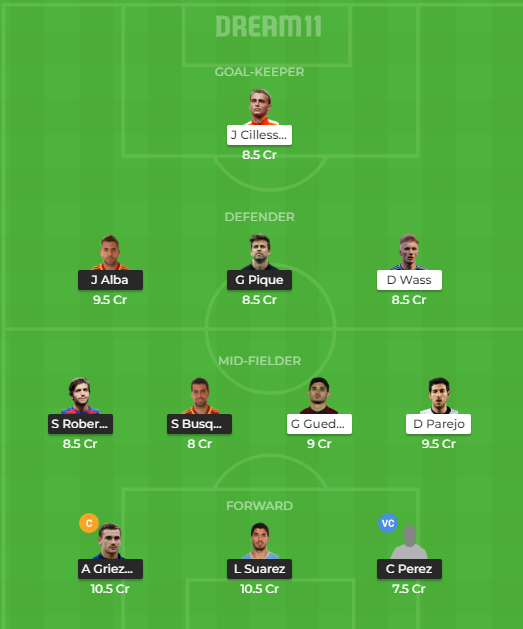 Catch all the live updates of BAR vs VAL Football Match, including live scores and match report. This time BAR vs VAL Dream11 Prediction will depend on the final team line-ups.