AND vs KAR Dream11 Prediction: After a quintessential win in their tournament opener against Bihar, Andhra Pradesh would be beaming with confidence and would hope to continue with their winning momentum in the game at Visakhapatnam.

The Hanuma Vihari-captained side is presently placed at the fifth spot in Group A rankings, and a win in the coming encounter would jump them to the second spot, considering their high NRR which stands at +3.432. On the other hand, Karnataka suffered their first defeat of the season, as they lost out the game against Baroda by a margin of 14 runs. The Karun Nair-led side is currently placed at the second spot in the points table, with a win and a loss each and four points to their name.

AND vs KAR Match Details & Broadcast:

The Round 3 Group A match between Andhra Pradesh and Karnataka will take place on November 11 at Dr. YS Rajasekhara Reddy ACA-VDCA Cricket Stadium, in Visakhapatnam. The live telecast will commence from 1:00 PM onwards on Star Sports Network, with live streaming available on Hostar.

AND vs KAR Squads

AND vs KAR Playing XI

AND vs KAR Best Players

The skipper played a pivotal role in the game against Bihar wherein he amassed 32-ball 46 with a solitary four and 4-sixes. The all-rounder has risen through the ranks with sensational performances across the domestic circuits and thus, shouldn’t be shied away from being picked as a captain or vice-captain for the upcoming contest.

Ashwin’s 39-ball 52 was one of the core reasons behind Andhra’s scintillating victory over Ashutosh Aman-led Bihar in the lately concluded duel. The opener whacked 5-fours and 2-sixes and maintained a striking rate of 133.33 throughout which eventually drove Vihar & Co towards a 10-wicket triumph.

Rohan’s swashbuckling knock of 40-ball 57 was one of the few positives for Karnataka in the lately finished game versus Baroda. The opener smashed 7-fours and a sole six in his stay in the middle and considering his form in T20s played this year, it won’t be a surprise if he’s able to emulate the same versus Andhra in the much-anticipated contest.

The Karnataka skipper was hitting the ball pretty decently in the recently finished game Baroda. His 31-ball 47 comprised 3-fours and as many sixes which nearly won the game for Karnataka in the much-talked contest. Taking into account his present form across Indian domestic circuits, one shouldn’t be surprised if he registers a match-winning total in the forthcoming game versus Andhra Pradesh.

AND vs KAR Dream11 Team 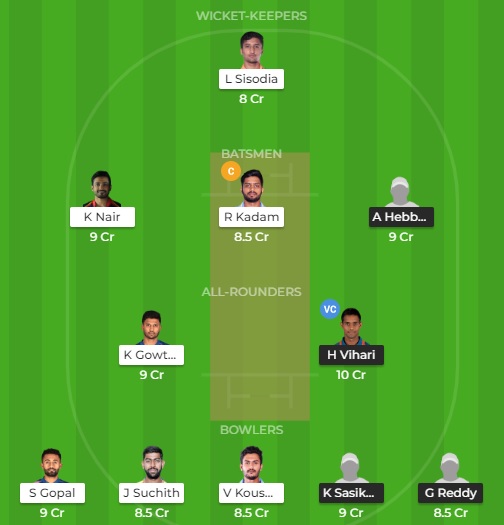