AND vs BRD Dream11 Prediction: Andra Pradesh will now take on Baroda in the Round 3 match of the Syed Mushtaq Ali Trophy. After beating Bihar convincingly by 10-wickets in the first match, Andhra suffered their first loss against Karnataka. Ashwin Hebbar’s 44-balls 61 and Prasanth Kumar’s 51-balls 79 helped Andhra post 184 but Karnataka chased down the target after Paddikal’s 122.

On the other side, Baroda got their second consecutive win. They beat Uttarakhand in their last fixture by 33 runs. After the collective batting show, Baroda posted 201 in 20-overs and restricted Uttarakhand on 168. Swapnil Singh and Arothe bagged 3-wickets each. Baroda have won two games out of three and are in top 4.

AND vs BRD Dream11 Pitch Report

Andhra Pradesh and Baroda game will be played at Dr. Y.S. Rajasekhara Reddy ACA-VDCA Cricket Stadium, Visakhapatnam. The surface is good to bat but will provide help to spinners. Chasing will be a good call. It’s a track where the captain should back their bowlers.

AND vs BRD Time Details

AND vs BRD Broadcasting Details

Andhra Pradesh and Baroda game will be telecasted on Star Sports. The live stream is available on Hotstar.

AND vs BRD Squads

AND vs BRD Probable XI

AND vs BRD Dream11 Best Players

Ashwin Habbar has played a good knock against Bihar and continued his form with 61 against Karnataka. He was also in good form in the previous season where he scored 310 runs in 10 innings. Her strike rate was above 150.

Indian Test player Hanuma Vihari was also in good touch as he scored 46 off 32 balls against Bihar. Vihari is not a big T20 player but he can score big runs as an opener and give you some crucial points in Dream11.

Swapnil Singh’s last three scores read 50, 36 and 47. Swapnil has been a gel who holds the middle order well. He also has a 3-wickets haul to his name against Uttarakhand.

Deepak Hooda is back in form after scoring 52 off just 36 balls against Uttarakhand. He has a good experience of T20 cricket. He also scored 34 off 21 balls against Gao.

AND vs BRD Dream11 Dream Team 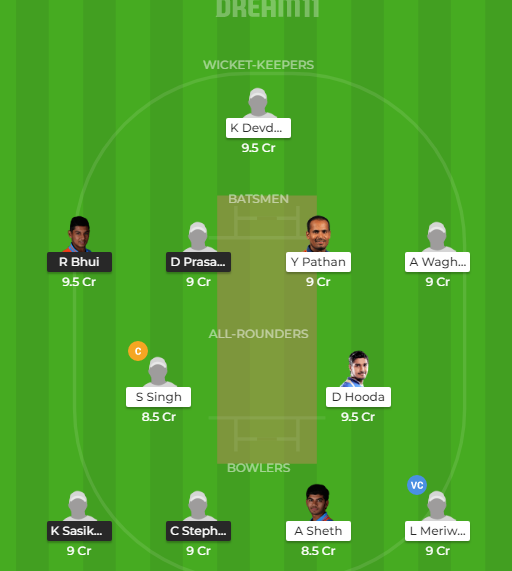