ZAL vs BEL Dream11 Prediction: The round 10 phase of the regular season match of the Turkish Airlines Euro league will be played between Zalgiris Kaunas vs Crvena Zvezda Mts Belgrade at the home arena of the Zalgiris on Friday.

Zalgiris is coming after the three-game losing streaks will battle to get back on the winning track when it hosts Crvena Zvezda Mts Belgrade (2-7) on Thursday of Round 10 match up. Zalgiris Kaunas fell to Panathinaikos OPAP Athens at home by a single point as the final scorecard of the match was 85-86. Zalgiris and Belgrade have faced each other six times in the EuroLeague this century. So far, Zalgiris holds a 4-2 edge in their head-to-head series. The last time they faced each other was during the 2017-18 regular season in Belgrade, where Zalgiris lost their on-road game. This contest would be Zalgiris’s redemption game as Zalgiris has already lost four games at home this season, and the team will have to play hard to reverse the situation. Zalgiris will have to watch out for an aggressive defense that has Zvezda swiping 7.7 steals per game, second-best in the league. Marius Grigonis is one of Zalgiris’s best scorers, averaging 11.6 points, 2.9 rebounds and 2.1 assists as a starter in all nine games so far. He is going to be the offense key of his side in the upcoming match.

Zvezda has also lost three back to back contests as they travel to Zalgiris for the round 10 match up. In the last game, Zvezda was defeated in Berlin by ALBA by 93-80. The side has one of the proactive forward players in the form of Billy Baron who gives a steady start to Zvezda, and he averages 11.4 points, 2.3 assists, and 2.1 rebounds per game. Zvezda has only won two games, both at home, and is still looking for its first road triumph. Beating the Zalgiris in their home arena would be uphill task for the visitors. With six losses in the last seven games, Zvezda needs a win badly. It’s never easy to triumph in Kaunas, but the numbers say that the guests could have a solid chance to steal a win. Zvezda has a small edge on Zalgiris in several statistics, especially on defense, but has lower shooting percentages from all ranges. Zalgiris can’t ignore the fact that Zvezda swipes 7.7 steals per game, which is the second-best in the league. Zvezda has a good chance of grabbing this game.

The match between Zalgiris Kaunas vs Crvena Zvezda Mts Belgrade will be played at the venue Zalgirio Arena,  Kaunas, Lithuania.  The arena can hold up to 15,415 spectators.

The match between Zalgiris Kaunas vs Crvena Zvezda Mts Belgrade will start at 11:30 PM IST on November 21, 2019.

The match between Zalgiris Kaunas vs Crvena Zvezda Mts Belgrade will not be telecasted in India. The live score streaming will be available on EUROLEAGUE.TV. Live Scores will also be available on euroleague.net official website.

Zalgiris Kaunas: The team confirmed that Alex Perez won’t be playing this game against the Belgrade and is parting ways with the Zalgiris. While Marius Grigonis is still battling his foot injury.

Crvena Zvezda Mts Belgrade: Derrick Brown is back in action after the injury. While Mouhammad Faye won’t be the part of the round 9 games. 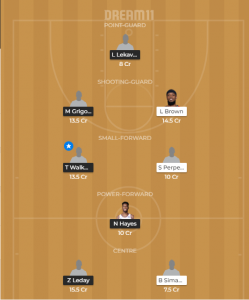