As Vivo Pro Kabaddi League 2019 is now half way through, it has been a roller coaster ride for most of the teams. Adapting the New Round Robin format this season, the match fixtures of the new format allowed all the teams to meet each other at least two times during the tournament before the play offs and qualifiers rounds. Match 66 of the Delhi  Leg played at Thyagaraj Sports Complex between Dabang Delhi K.C and Patna Pirates marked the exact mid half of the tournament.

Till now, the intriguing and electrifying tournament has seen some magnificent performances from some of  the star players in this season. Much to the surprise of the viewers, this season has given the fans a see-saw competition. Almost every team has reached the top spot and also went down. Currently, Dabang Delhi K.C who are having a splendid run so far. The culmination of the first half saw Dabang Delhi K.C topping the points table. The side has Naveen Kumar who has been one of the best raiders of this season . He was the top raider after the conclusion of the first half of the tournament.  The first half of the tournament was packed with full of surprises but after its conclusion, we have come some star performers and some interesting stats to look up to. Let’s take a glimpse:

Randhir Singh, Coach, Bengaluru Bulls said, “We have completed 13 matches, and at the mid-season the first thing we have realized that #IsseToughKuchNahi – the team through the first half has moved on the points table after very match. All my fellow coaches seated here will agree that the competition this season is extreme. Second thing is the beauty of the league which has changed the thought of Kabaddi being a raiders game; for the past 6 seasons raiders dominated – but this season there’s a clear domination of defence in all teams. Third is the love that these players are getting from their fans – I wish I was a player in today’s time. VIVO Pro Kabaddi has pulled up the stature of the game and given so many players a platform to show their skills. The league has given us stars who were all NYP’s – Vishal Bhardwaj, Pawan Sehrawat, Naveen Kumar, Pardeep Narwal. Fans and viewers, you are in for the ‘Toughest’ Half – you will see big changes in the points table; the team in the 8th position can rise up to the 4th, and vice-versa.”

The Captain of the Table Toppers Joginder Narwal, was quoted as saying “We are half-way through the league and no team has a confirmed spot for the playoffs, any team can move up on the table depending upon their performance. However, the one thing that is surely going to happen is that the upcoming matches are going to be some of the toughest ones in the season. Every team will put their best foot forward to grab a spot in the playoffs. Even though Dabang Delhi is at the top of the table now, I can assure you that the team is not over-confident – every game is still a big one for us. We understand this can change any moment due to the new format and to ensure we hold our spot, we must constantly keep proving ourselves on the mat. We are extremely thankful to the constant support our fans have provided us with – we are happy that the team has performed immensely well this year.”

Former Pro Kabaddi Player and current coach of the Puneri Paltan side Anup Kumar, said, “This season in indeed tough, all teams are performing well and giving their best shot. But one thing that should be taken care of by coaches is the weaknesses of the team – there have been games where all the seven players perform very well, and some games where all 7 fail. In such situations understanding the problem and fixing it with an alternate route or strategy is important. All NYP players who are coming from the NYP programme of the league are performing extremely well. Their performance reflects well on Kabaddi and shows the growth scale of the sport. They are the future and the face of the sport, and I would encourage more players from the NYP programme to be part of the league.” 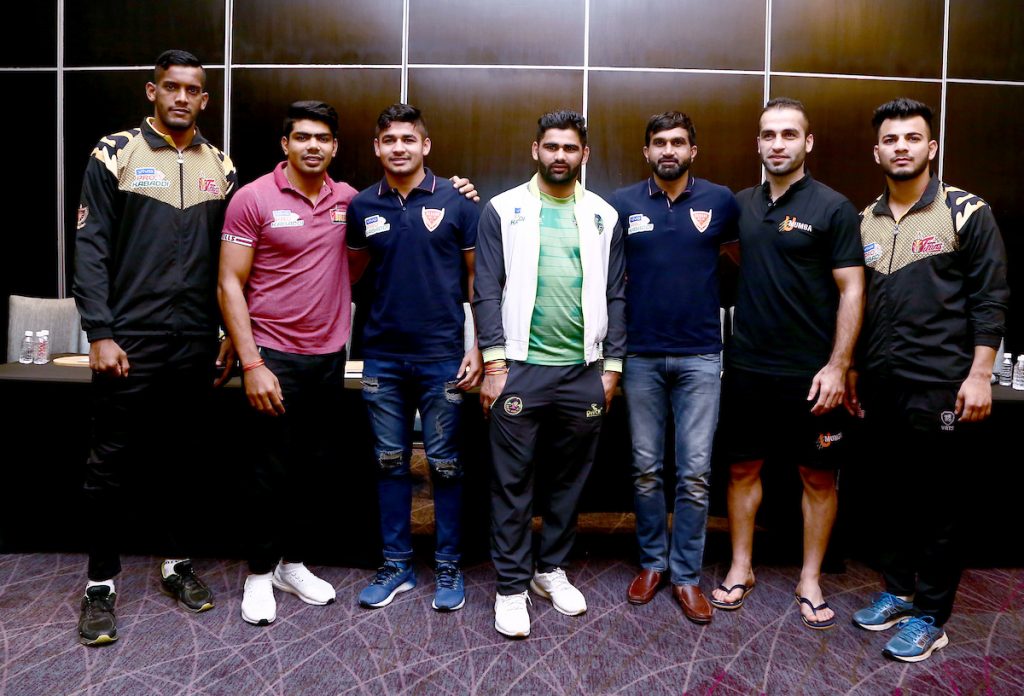 The top raider of Bengaluru Bulls Pawan Kumar Sehrawat looked excited before the starting of the home leg as he expects the home crowd to cheer for him while he wins games for his side. The ‘Hi-Flyer’ Pawan Sehrawat, Green Sleeve Holder and ace raider of Bengaluru Bulls said, “The defense is really strong this season because of which, raiders are finding it tough to score. The defenders come in with a specific plan in mind to tackle some of the raiders like Siddharth Desai, Naveen Kumar, Pardeep Narwal and me. If you notice, compared to the last season, this season, the points scored by the raiders is quite less; that is because of the strong defense and Super Tackles by defenders. This is a great evolution for Kabaddi as a sport. The tougher the game gets, the more challenges we face, making us work harder and in turn giving our best performance to win the game. The new format is great, we don’t have groups – the team that plays well qualifies for the playoffs. As a team, Dabang Delhi is performing well, as the ‘Toughest Half’ begins – let’s see who finally qualifies for the play offs.”

The raiding stalwart of Telugu Titans and the ace raider Siddharth ‘Baahubali’ Desai said, “This season is a tough one, and over the past couple of months, I have learnt a lot of new skills. Last year, I used to get points in all the skills that I used to apply, but this season, things have changed. The defenders and coaches from other teams have analysed my strengths, seen where I get maximum points from and have worked accordingly – thus, making it difficult for me to make points. So, right now, I’m trying to change my skill set and adapt new moves. Hopefully, I’ll play a better game in the second half of the season and take the team up in the points table.” Patna Pirates skipper Pardeep ‘Record-Breaker’ Narwal,  said, “As a team, we are concentrating on playing better in the next matches and not repeating our mistakes. The toughest half of the season has begun, and we look forward to starting on a winning note. We are also working on our defense and offence, and hopefully it’ll be a good second half for the team.”

Now that, the upcoming stages of the tournament is going to be very thrilling as it would also be interesting to see the race of the teams to reach the top position in order to reach the play offs. Here is what a Kabaddi fan can expect from the finishing half of the captivating contest: