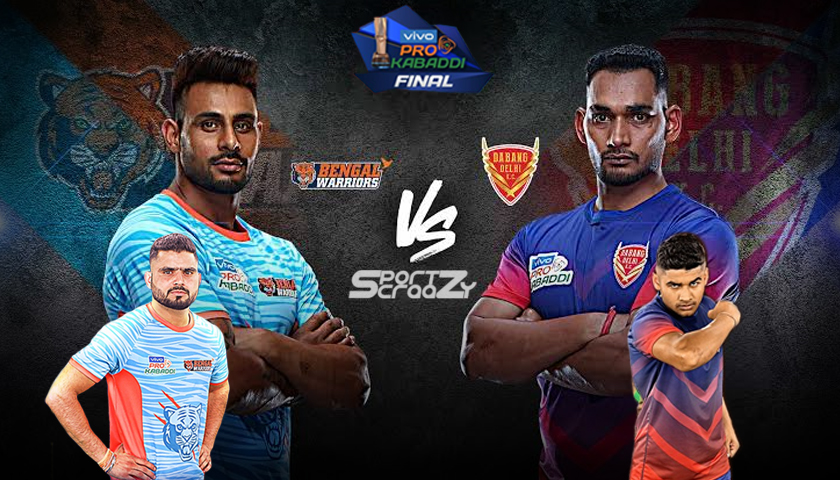 18th October 2019: Vivo Pro Kabaddi League Season 7 has finally reached its twilight stage as the two big and deserving teams in Bengal Warriors and Dabang Delhi K.C have reached the well-deserved stage of the tournament. Their journey so far has been stupendous. Dabang Delhi K.C who started off their campaign splendidly, having registered an eight-match winning streak. While Bengal Warriors, who started off their campaign a win & loss pattern and as the tournament proceeded, the Bengal side did stand up to their fans’ expectations. They have been beefy against their opponents and have won games consistently.

How Dabang Delhi reached the Finale:


Noone had expected the Delhi side to be so strong in the tournament. They started off this year’s campaign by beating Telugu Titans and then by levelling up their game as the season advanced. After a promising campaign last year that saw them break their playoffs duck, Dabang Delhi K.C. took a step further this season and have made it to their first Vivo Pro Kabaddi final. While the star of the show has undoubtedly been Naveen, the team’s other raiders have also contributed immensely to the team’s success.

Coach Krishan Kumar Hooda, the architect behind Dabang Delhi K.C.’s rise in the past two campaigns, took joy in his team’s victory but, like always, demanded more from them as well.

“I’m happy but not satisfied. I cannot be satisfied. There is always room for improvement and there’s always something we can work on. I believe there is more to come from this team,” he said after his team’s victory over Bengaluru Bulls in the Semi-Finals.

Skipper Joginder Narwal was quick to support his teammates as he praised the youngster Naveen Kumar immensely. He also expressed the desire and will to hoist the trophy of this season.

“We lost in the playoffs last year due to some uncharacteristic errors. And this year, the coach analyzed those mistakes, made us work on them while instilling belief in us that it would be us hoisting the trophy this year,” said Narwal.

How Bengal Warriors reached the Finale:

Needless to say, the side has been very clinical en route to the finals. Starting the tournament as one of the favourites, they started their season with a bang as they announced their arrival in the tournament but they lost the very next match to Jaipur Pink Panthers. Initial stages saw the side wobble with their form but as the season advanced, they cleared their intentions in reaching the finals.

Skipper Maninder Singh who is out from the team due to an injury has obviously hit the side hard. Sukesh Hegde has come to the fore in the latter half of the league to cover up for his captain by his stupendous raids and points scoring.

Hegde, who has played a Vivo Pro Kabaddi final before, kept his cards close to his chest when quizzed on his team’s strategy for the final.

“It will be Bengal Warriors’ first appearance in a final, but I have been a part of a final before with Gujarat Fortunegiants. Our game-plan for the grand finale is to make some different plans but look for the same result as we managed in the semi-final against U Mumba. We shall devise our plans according to the opposition and look to execute it in a proper manner.” Hegde said.

“We will also plan differently compared to what we did in the league stage. I am confident that we can get the better of Joginder and Ravinder through the combination of Nabibakhsh, Prapanjan and me. Two out of the three of us are bound to find success against them and our team is fully confident about that,” Hegde added.

Here are the Records and Stats of the Dabang Delhi of this season:

Here are the Records and States of the Bengal Warriors of this season:

Few Facts and Stats before the Big Match:

– Both these teams are playing their 1st final, as a result, we are assured of a new Champion in PKL.

– If Dabang Delhi wins this time, Vishal Mane would be the first player in PKL history to be a part of 3 different winning teams (Season 2 with U Mumba, Season 5 with Patna Pirates and Season 7 with Dabang Delhi).

-Bengal Warriors were the only team this season that Dabang Delhi was not able to beat.