The 19th match of the Mzansi Super League 2019 will be played between Tshwane Spartans and Paarl Rocks at the super sports park, Centurion.

Tshwane Spartans and Paarl Rocks game will be telecasted on Sony Six. The live stream will be available on Sony Six.

The match will be played at Super sports park, centurion and at the surface history the pitch offers the seam movement of the deck during the initial days, but when the pitch settles down it becomes conducive for batting.

The team winning the toss should field first and try to exploit the bowling conditions in the first innings.

Tshwane Spartans have played 5 games so far, won 2 games and rest 3 games ended in no result. With 5 games still to go Tshwane Spartans need to catch up the pace and win most of the upcoming matches.

Paarl Rock is tough opponent and is at the top of the table, beating them won’t be easy for Tshwane Spartans by any means. They will have to play to their full potential if they have to beat the Rocks.

Paarl Rocks have played 6 games so far and won 4 of them, lost 1 match and 1 match ended in no result. `They are at the top of the table with 19 points and with 4 games to go they will look to carry the winning momentum in the upcoming matches.

Looking at Paarl Rocks form they need to play normal cricket against Tshwane Spartans and not look to try something out of the box.

AB De Villiers– Ab De Villiers is another international superstar, who couldn’t live up to the expectations, but still has shown glimpse of sheer brilliance in patches. He has scored 84 runs in 4 innings at an average of 21

Dean Elgar– If Tshwane Spartans managed to win all the games they have played, a big chunk of credit goes to Dean Elgar heroics. He has scored 163 runs in 4 innings at an average of 40.75 including 2 fifties.

Faf Du Plessis-  He has not been in the best form in the tournament and has scored only 91 runs in 5 innings at an average of 18.2, but on all the occasions it was his poor shot selection that led to his dismissal. But as we say form is temporary, but class is permanent, he will surely bounce back.

James Vince- James Vince is the only batter for Paarl Rocks, who has a high level of discipline and consistency in the tournament. He has scored 189 in 4 innings at an average of 47.25 including 1 fifty. 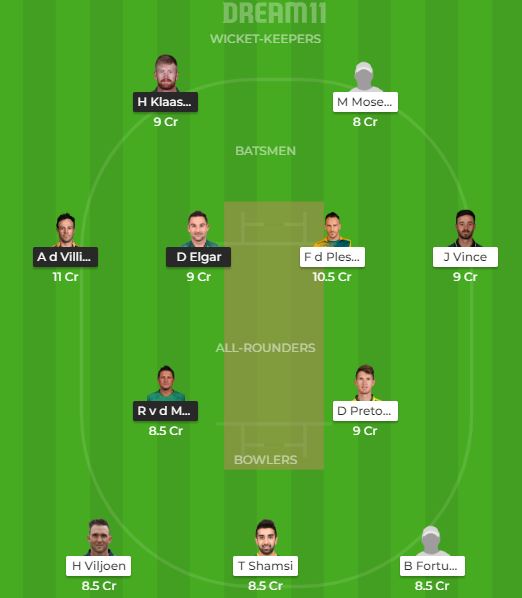