TRP vs UP Dream11 Prediction: After a comfortable win in the game against Tamil Nadu, Samarth Singh-led Uttar Pradesh would be competing against Tripura in what promises to be an exciting contest for fans of both the units.

UP are presently occupying the fourth spot in Group B rankings with a win and a loss each in two matches they’ve played so far. On the other hand, Tripura is on the verge of eviction from the T20 tournament with two defeats in three matches and few more losses could completely nullify their chances of playing the Super League stages. The Manisankar Murasingh-led unit suffered a 14-run defeat in the lately played game against Kerela and would hope to turn their fortunes from the forthcoming game versus UP.

TRP vs UP Match details & broadcast:

The Round 4 Group B match between Tripura and Uttar Pradesh will be played on November 12 at St Xavier’s College Ground, in Thiruvananthapuram. The live telecast will commence from 9:30 AM onwards on Star Sports Network and Hotstar.

TRP vs UP Squads

TRP vs UP Playing XI

TRP vs UP Best Players

Manisankar Murasingh would be the key player for Tripura in the highly crucial contest versus Samarth Singh-captained UP. The all-rounder rendered a decent show in the previous outing wherein he grabbed two wickets and registered a 16-ball 27 to his name. The Tripura skipper could be easily backed to put up a sparkling exhibition in the forthcoming duel.

Milind Kumar remains a certain inclusion for TRP vs UP Dream11 contest. The middle-order batsman scored 36-ball 54 in the lately played game versus Kerela, an innings which comprised of 6-fours and a solitary six and nearly took Tripura to what could have been a sensational triumph for Manisankar’s men in the ongoing season of Syed Mushtaq Ali contests.

Upendra Yadav would be a definite addition from UP in the upcoming contest. The 23-year-old has been scoring heavily in the ongoing season of domestic T20 contests. The lately played game against Tamil Nadu witnessed the wicket-keeper batsman scoring 41-ball 70 which comprised of 4-fours and 5-sixes, and thus a similar performance could be expected from his end in the much-coveted encounter at Thiruvananthapuram.

Kuldeep Yadav’s spin prowess could wreak havoc onto the opposition if the conditions at Thiruvananthapuram favour the left-arm chinaman in the upcoming duel. The Kanpur-lad picked two wickets in the recently finished game against Tamil Nadu and could be vouched to replicate a similar show versus Manisankar Murasingh & Co.

TRP vs UP Dream11 Team 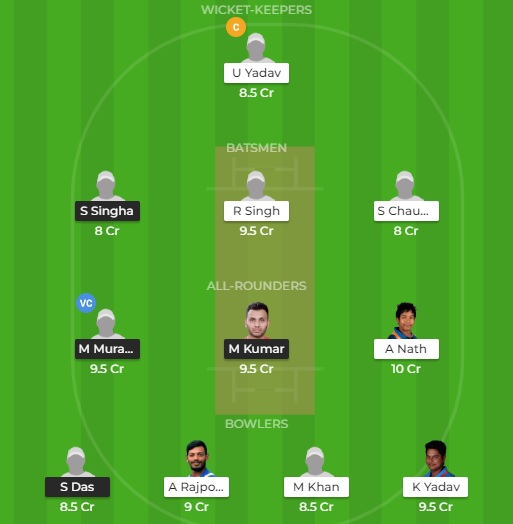