The Suns had blazed through the start of the season, holding one of the top marks in the Western Conference, but have come down to in the points table over the last couple of weeks. Phoenix has lost three out of their last five games, including their last two straight contests with the last loss coming against the Sacramento Kings by 120-116. The Suns were guided by Devon Booker in the loss to the Kings. Booker led the scoring of his side by totaling 30 points consisting of 5 rebounds and 8 assists. Next comes Kelly Oubre Jr. who contributed with 20 points and added 5 steals defensively. The Suns offense sits in the top third of the league in more than one category.  The area to watch in this game, the Suns have the 6th best 3-point percentage, while the Suns are the 24th worse in defending the 3.  Suns are making 37% while the Pelicans are giving up 37%.

New Orleans Pelicans have struggled to find any level of consistency this season as their young core group has struggled to get headway in the win column. But coming into this contest the Pelicans are coming off by winning a  strong home game over the Portland Trail Blazers as the final score of the game was 115-104. Jrue Holiday led his side’s scoring by scoring 22 points (5 rebounds, 10 assists) followed by Brandon Ingram who too contributed very well with 21 points (7 rebounds and 5 assists). Their offense is good but their biggest issues have been their lack of efficiency defensively as they have been one of the worst teams in the league on that end of the floor allowing 118.9 points per contest. The Pelicans have the 5th best 3-point offense making 38%, which is better than the Suns record. in this season.

The basketball match between Phoenix Suns vs New Orleans Pelicans will be played at the venue Talking Stick Resort Arena, Phoenix.  The Arena can hold around 18,400 spectators.

The basketball match between Phoenix Suns vs New Orleans Pelicans will start at 9:00 AM IST on November 22, 2019, Friday.

The basketball match between Phoenix Suns vs New Orleans Pelicans will be telecasted in India on the Sony Sports Network. You can also watch it online on the SonyLIV app. Live Score & Streaming will also be available on the NBA official website.

New Orleans Pelicans: Derrick Favors has been sidelined due to back injury and has been listed day-to-day by the team. 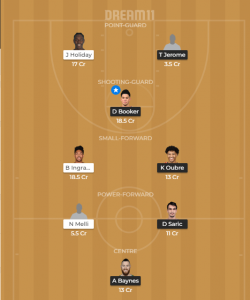