ORN vs SO Dream11 Prediction: In the next match of Russian Premier League, PFC Sochi will travel to play at the home of FC Orenburg. Both the teams have had a forgettable start to the season and are yet to win a match. This encounter is a good opportunity to register a win for both the teams and try to turn around the season which has started to go downhill already.

ORN vs SO Match Timing & Match Details: The two teams will meet at Gazovik Stadium, home of FC Orenburg. The match is scheduled to start at 8:30 PM IST, on 16th August 2019.

ORN vs SO Broadcast Details: The match will not be telecasted in India. There is no live stream available either. Live score updates, however, will be available.

ORN vs SO Best Players:

FC Orenburg Top Players
Djorde Despotovic – The Serbian forward has scored 2 goals this season till now. His team will need him to find the net more often as the season progresses.
Joel Fameyeh – He is the joint top scorer for the club this season with 2 goals to his name. He is looking in good touch and is the key player in the attacking front.

PFC Sochi Top Players
Ivan Novoseltsev – The defender has been impressive at the back and will have to lead the pack so that they gain back their confidence as early as possible.
Timofey Margasov – Another defender who has been quite impactful during his time on the field this season. He has good ability to cross the ball which also makes him a key in the attacking third.

Suggested ORN vs SO Dream11 Team: 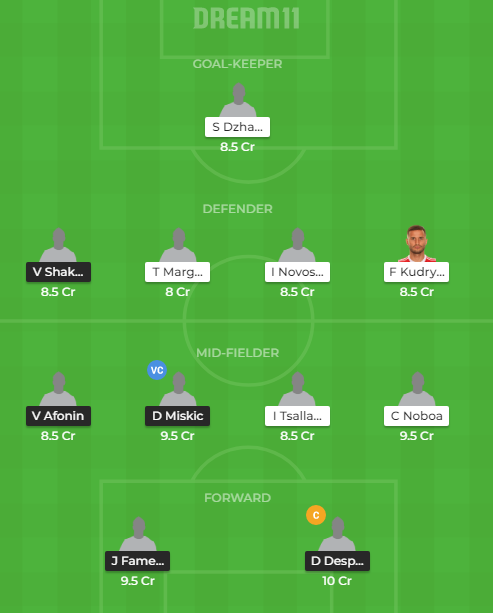 Catch all the live updates of ORN vs SO Football Match, including live scores and match report. This time ORN vs SO Dream11 Match Prediction will depend on the final team line-ups.