NMG VS JOZ Dream11 Prediction: Defending Champions Jozi Stars will square up against Nelson Mandela Bay Giants in the fourth match of the second edition of Mzansi Super League. Jozi Stars have played one match in the league so far, while Mandela Bay Giants are set to play their first game this season.

Packed with star players in the team, Jozi Stars won the inaugural league in 2018. Unfortunately, the defending champions haven’t started on a right note in the second edition of the league, having lost to Cape Town Blitz in the first match on Friday.

Nevertheless, Daniel Christian was the pick of the bowlers, while Reeza Hendricks played a sensational 80-run knock off 53 deliveries, along with a couple of valuable contribution from Temba Bavuma and Rassie van der Dussen.

The Mandela Giants haven’t had an ideal tournament last season, having finished fourth in the league, winning only four matches out of 10. They must have forgotten the past and would look to showcase better performances this year.

Imran Tahir and Chris Morris will lead the bowling attack this season, while English batsman Jason Roy and Ben Dunk are set to strengthen the batting line up.

The match is scheduled to be held at St George’s Park in Port Elizabeth. The team which wins the toss is likely to bat first as in the last three out of four matches, the teams batting first has yielded positive results.

The match is scheduled to be held at 5:30 PM on Sunday.

The match between Nelson Mandela Bay Giants and Jozi Stars will be broadcasted on Sony Television Network. The Live streaming will be available on Hotstar.

Opener Reeza Hendricks hit the ball around the park in his first game of the league, scoring 80 runs off 53 balls. It was laced with 11 fours and a six.

Having a host of experience in T-20 format, Rassie van der Dussen will be a crucial player for Stars. One of the reliable players in the line up, Dussen is likely to hold the innings together and make a decent contribution to the team ahead of the game against Nelson Mandela Bay Giants.

A T-20 specialist, Jason Roy will be one to look out for in the series. Batting up the order, he would look to make an impact right from the start of the season.

Having a vast experience of bowling in all the formats, Imran Tahir is likely to play major role with the ball if Nelson Mandela Bay Giants fancy any chances in the league. 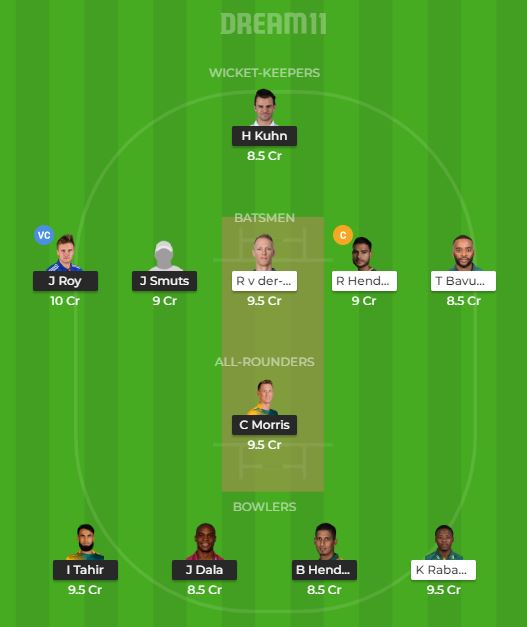