LIV vs NEW Dream11 Prediction: In the next match of Premier League, Liverpool will host Newcastle United at home. Liverpool has started off the season just like what they were expected to do, winning all the 4 games so far and set themselves at the top of the table. Newcastle has struggled to find consistency in these 4 games and is 14th position currently.

LIV vs NEW Match Timings & Details: The match is scheduled to start at 5:00 PM IST, on 14th September 2019. The match will be played at Anfield, home of Liverpool.

Liverpool
Mohamed Salah – Another season and another fine start for the Egyptian. He has found the net 3 times in as many matches and has made 2 assist as well.
Virgil van Dijk – The Dutch defender is not just a key at the back but is also a good option during the set pieces and has a strong header as well. He has scored 1 goal in this season.

Newcastle United
Fabian Schar – The Swiss defender is a very good reader of the game. He likes to play long balls and find gaps to create threats. He has scored 1 goal as well this season.
Joelinton – The Brazilian striker is a good dribbler of the ball and sets himself into attacking positions. He also gets himself involved in the defense whenever needed. He has 1 goal so far. 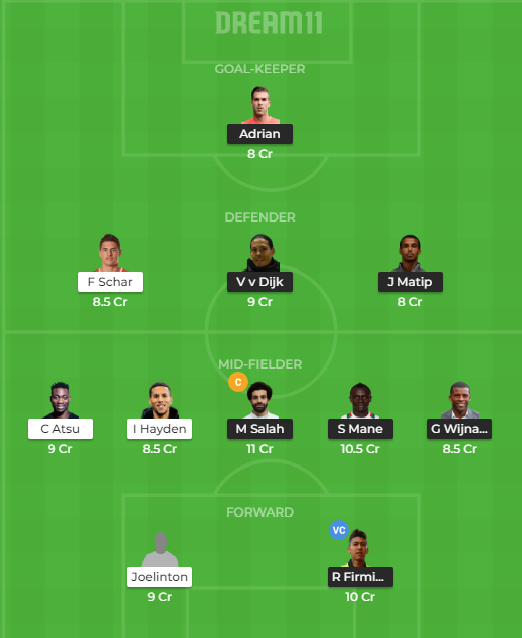 Catch all the live updates of LIV vs NEW Football Match, including live scores and match report. This time LIV vs NEW Dream11 Prediction will depend on the final team line-ups.