LAC vs TOR Dream11 Prediction: The NBA 2019-20 regular season match will be played between the second-place Toronto Raptors of the Eastern Conference and the sixth-placed Los Angeles Clippers of the Western Conference. The home team Boston Celtics welcomes the Dallas Mavericks for their 9th match of the season.

With six wins and three losses till now, LA Clippers are currently ranking sixth in the Western Conference. They are coming into this contest after defeating Portland Trail Blazers by 107-101 in their last game. Kawhi Leonard would be the biggest highlight during the game as he faces his former teammates whom he helped win the first-ever NBA title. The Clippers are in a good form as they bounced back with a strong defense against the Portland Team after losing to Milwaukee Bucks. Kawhi Leonard and Lou Williams are the two key players for the side.

Having one of the best seasons so far, Toronto raptors have managed to win seven games while they have just lost 2 matches. With a second place in the Eastern Conference, Raptors are comfortably enjoying their top position. The side would be missing Kawhi Leonard who left the side to join the Clippers. They have a great team with the likes of Pascal Siakam playing great basketball off-late. In fact, the Raptors are one of the rare teams in the league that can match-up with the Clippers. Raptors would be high on confidence as they defeated the Los Angeles Lakers by 113-104 points. Pascal Siakam and Fred Vanvleet are the key players of the side.

The match between Los Angeles Clippers vs Toronto Raptors will be played at the venue Staples Center, Downtown Los Angeles. The Arena can hold around 21,000 spectators.

The match between Los Angeles Clippers vs Toronto Raptors will start at 8:00 AM IST on November 12, 2019, Tuesday.

The match between Los Angeles Clippers vs Toronto Raptors will be telecasted in India on the Sony Sports Network. You can also watch it online on the SonyLIV app. Live Score & Streaming will also be available on the NBA official website.

Toronto Raptors: Point Guard player Kyle Lowry is set to miss this game following his thumb injury.  He has been an impactful player and his scoring will be missed since he has been advised to sit out for the next two weeks. Shooting guard player Patrick McCaw won’t be playing this game due to his knee injury. 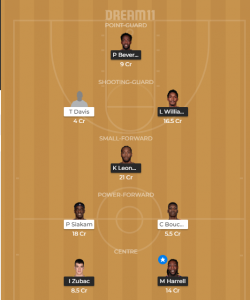