Jozi Stars are the strongest side of this league. They won the title of the 2018’s edition where they beat Cape Town Blitz in the final. Jozi Stars have signed Pakistani player Shoaib Malik who was the captain of Guyana Amazon Warriors in the recently concluded edition of CPL . Chris Gayle, Kagiso Rabada and RVD Dussen are other key players to look out for in the franchise.

Cape Town Blitz was a strong contender to lift the previous year’s title, however, they faltered in the final, suffering defeat at the hands of Jozi Stars. Cape Town was the table-topper of the last season. They have signed two new players for this season. T20 Blast’s top performer Moeen Ali and Pakistani pacer Wahab Riaz will also join this squad. Wahab will join the squad after the Australia T20 series.

Jozi Stars and Cape Town Blitz game will be played at New Wanderers Stadium, Johannesburg. This is the home ground of Jozi Stars. The surface is a fine batting track. West Indies chased 236 on this track. The ground also offers some help to spin but it’s a pacers dominated surface. Batting friendly pitch can help to chasing sides. 200 might be chased on this ground.

A T20 specialist, Chris Gayle will be one of the key players in the side. Looking at his recent performances, he has a hundred in Global T20 Canada and also CPL 2019.

Shoaib Malik is one of the T20 specialists in league cricket. He was the top-performer in CPL 2019 as captain. He scored 317 runs in 12 innings at an average of 63.40 and also picked 6 wickets.

Moeen Ali is playing for the first time in Mzansi Super League. He led Worcestershire to the T20 Blast final of this season. He scored 365 runs in just 7 innings at an average of 73. He also picked 11 wickets at an average of 15.81.

Liam Livingstone is an all-rounder. He was in good form in T20 Blast this season. He picked 14 wickets and also scored 273 runs in the tournament. 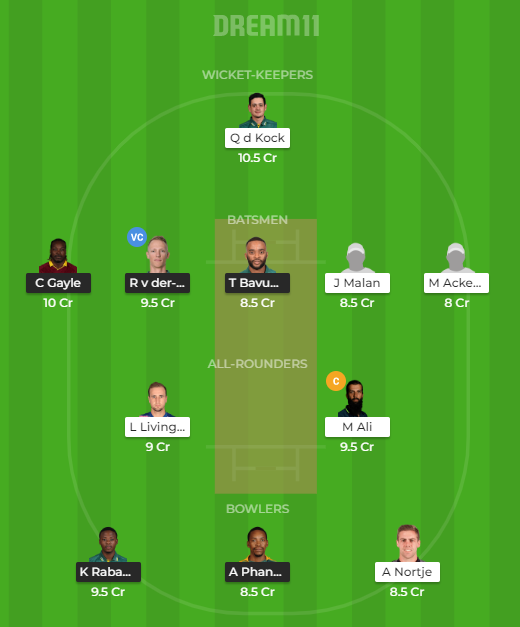