DEN vs VAN Dream11 Prediction: Denmark and Vanuatu will meet in the 6th match of the CWC Challenge League Group A fixture. Both teams had a dull start in the tournament. Denmark lost against Singapore and Malaysia. Vanuatu lost against Canada in their first game. Denmark though showed some good fight in both games while chasing 193 and 250. Vanuatu in their last game got bowled out for just 160 against Canada. The game is important for both teams to stay alive for the playoff berth. Only one team from respective groups will get to qualify for the next round.

Denmark and Vanuatu game will be played at Kinrara Academy Oval, Kuala Lumpur. The ground is hosting all the games of this tournament. It’s a batting track but has good assistance for the pacers as well. Spin is likely to make an impact later in the game. Canada scored 408 against Malaysia in the last game. 250 is a good score on this ground.

Denmark and Vanuatu game will not be telecasted on any platform. You can watch it on Malaysia Cricket Live’s YouTube channel.

Hamid Shah is the skipper and an all-rounder. He has good numbers in domestic format. He scored 42 against Malaysia in the first game.

A valuable player in the side, Fredrick Klokker has a good amount of experience in domestic cricket as well. He scored 4000 runs in domestic at an average of 37.

Matautavaa is an all-rounder. He picked 2 wickets in the last game. He bats at number 4 and good at batting as well.

Tommy is an opening batsman and started very well in the first game against a good-side Canada. He scored important 42 runs in the previous game. 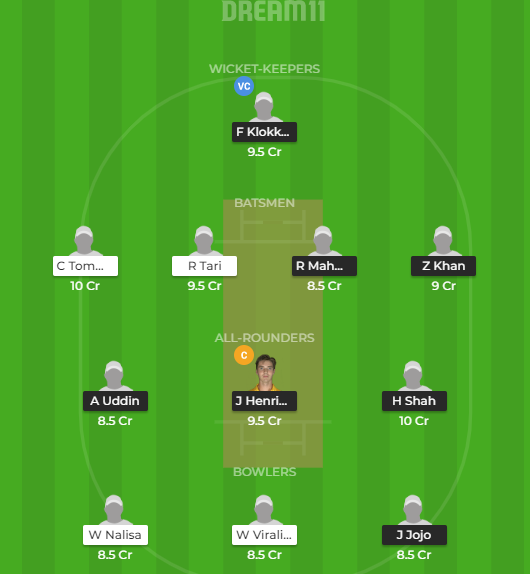