Dabang Delhi is ready to play the last match of their home leg, where they will clash with Patna Pirates at the Thyagaraj Stadium, Delhi on 30th August 2019. Delhi will look to finish the home leg with the fourth consecutive win, and looking at their form, it seems to be a matter of time. This will also be a record in its own.

Today’s match will be a contest between two of the top raiders of Pro Kabaddi Season 7 as Naveen Kumar goes against stalwart Pardeep Narwal. Pardeep has a record to his name, of scoring the most consecutive Super 10s in Pro Kabaddi, standing at 8.

Naveen Kumar has been Dabang Delhi’s top player this season and has equalled Pardeep Narwal’s record of 8 consecutive Super 10s, which he got in Pro Kabaddi Season 5. Today, when he goes out on the mat, he will have a chance to re-write the record in his name. 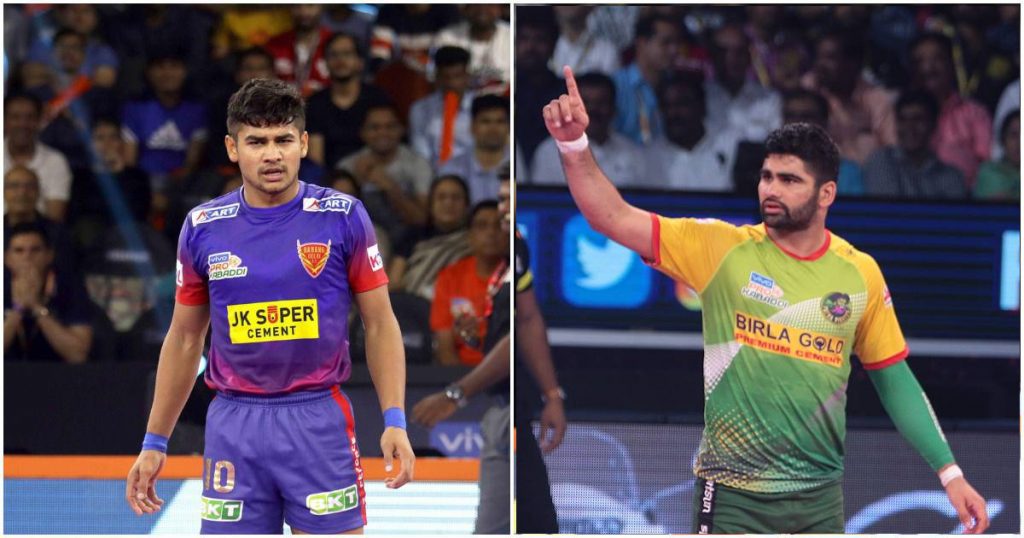 Let’s analyze the performance of Naveen in Pro Kabaddi Season 7, and see if he really can surpass Pradeep Narwal record of most consecutive Super 10’s/

Naveen has already scored 116 in 10 matches with 115 raid points to his name, at an average of 10.5 raid points per match, which is the second-highest this season, only behind Pawan Sehrawat who has a slightly higher average of 11.63.

Looking at the overall record, Naveen finds himself third-highest on the list with 9 raid points per match, which is highly impressive for a young man. Only 3 raiders in the history of Pro Kabaddi have scored an average of nine or more points throughout the season. Naveen is currently third in the list in terms of average raid points, Pardeep Narwal tops the list with 10 average points per match.

He has scored eight Super 10’s this season, equaling the record of Pardeep Narwal, and he he has golden opportunity to set a milestone this season.

When it comes to the least failed raid percentage in Pro Kabaddi Season 7, Naveen Kumar tops the list with 10%, followed by Deepak Hoodaa (14%) and Mohammad Nabibakhsh (17%).

Looking at the last 5 matches record Patna Pirates clearly has an edge over Dabang Delhi. They have won 4 out of the 5 matches, but Season 7 has been nothing short of a disaster for Patna Pirates thus far, whereas, Dabang Delhi is going through a purple patch and are sitting pretty on top the table.

Going by current form and recent performances, Naveen Kumar looks more than set to enter the record breaks and leave his senior Pardeep Narwal behind.