Former Australian spinner Brad Hogg has come up with a proposal of how to successfully conduct the T20 World Cup scheduled to be played this year in Australia.

The coronavirus has forced the suspension/cancellation of many sporting events across the world. The World Test Championship is one of the tournaments that has been affected due to the pandemic. Even the biggest cash-rich T20 tournament Indian Premier League has been left on a cliffhanger. 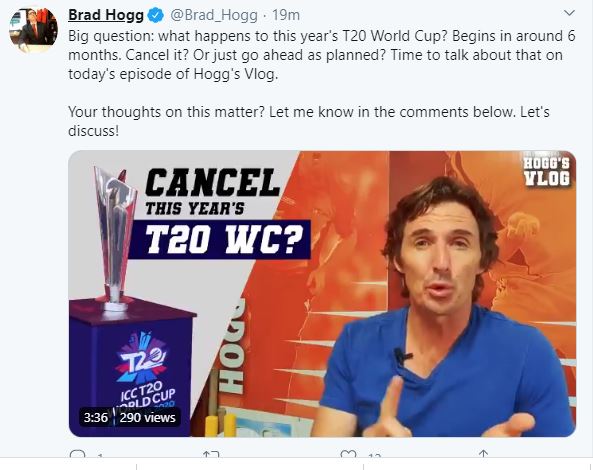 The ICC Men’s T20 World Cup which is scheduled to take place from October 18- 15 November in Australia across seven venues. The country has announced a six-month travel ban as a measure to contain the spread of the virus. The growing number of cases have led to so many doubts over the tournament’s occurrence to take place.

However, the former Australian spinner Brad Hogg is optimistic about the T20 World Cup this year. In fact, he suggested a few ways on how things can be dealt with for hosting the Mega event, keeping the social distancing and other precautions in mind.

Hogg suggested that instead of using the commercials flights, instead, the players use the charter flights to come to Australia for the mega-event. Adding to that, Hogg also said that the players could also go to Australia one month prior to the World Cup in order to fulfil the mandatory self-isolation rules.

Citing the importance of conducting the T20 World Cup as the situation gets better Hogg said in a video on his official Twitter account, “We have to play the T20 World Cup as it is planned. A lot of players Internationally have been lockdown and they have not been able to go out to train. We have to get them in Australia probably a month earlier,”

“There are no commercial flights, so we need to use charter flights. Each participant who will board charter flights needs to be tested for coronavirus, if they pass the test, they come to Australia. When they arrive in Australia, they will be quarantined for two weeks, and then they will be tested again. Once they pass it, they can train and play the tournament.”

The ICC Board of Members had a teleconference discussion on the impact of the pandemic on the sports globally, forcing the suspension or postponement of several sporting tournaments. One such being the Tokyo 2020 Olympics that has been moved to July next year.

After the meeting, the ICC also said that the T20 World Cup will “go ahead as scheduled”.