BLR VS UP Dream11 Prediction: Match 39 of the VIVO Pro Kabaddi League will see the encounter of UP Yoddha and Bengaluru Bulls. The last time they played against each other, Bengaluru Bulls had an upper hand as they beat the UP Yoddha with a comfortable score margin of 37:27. Bengaluru Bulls are at the second spot from the up whereas, UP Yoddha is placed second from the bottom.

Bengaluru Bulls captain Rohit Kumar along with raider Pawan Kumar Sehrawat have performed as per their quality caliber. Pawan Kumar who scored 17 points in the match against Telugu Titans is in a scintillating form. But talking about their last game, the side lost to Haryana Steelers in a thrilling match.

UP Yoddha who have only won just one game in a total of six games they have played, has not been able to find the right team combination to be able to win games. In the following game against the Bulls, the side would not want their struggle to continue and finally get on the winning terms.

BLR vs UP Match Timing & Match Details: The Kabaddi match between Bengaluru Bulls and UP Yoddha will be played at the Arena by TransStadia, Ahmedabad on 8th August 2019 at 7:30 PM IST.

BLR vs UP Broadcast Details: The Kabaddi match between Bengaluru Bulls and UP Yoddha will be telecasted across Star Sports Network in multiple languages. Live Score updates and live stream will be available on Hotstar.

BLR vs UP Best Players:

Bengaluru Bulls Top Players
Pawan Sehrawat – The mainstay of the raiding department, Pawan has been a star performer of this season due to his following his brilliant match scores. He has scored 81 points in just 6 matches and has already surpassed 50 points.
Rohit Kumar – The skipper of the side has been delivering well along with his partner Pawan Sehrawat that has resulted in his teams’ second position in the standings. So far he has scored 30 points in 6 games and will be a key player in the match.

UP Yoddha Top Players
Monu Goyat – The key raider of his side has delivered in all the games he has played. His stubborn raiding skills always come to the rescue of his side. So far he has 23 points in 6 games.
Sumit – The out of the box talent of his side has also contributed well for his team and he definitely finds a place in the playing seven. He has 19 points in 6 games which are fair for a defender.

BLR V UP Match Prediction: Looking at the forms of both the teams, Bengaluru Bulls have an overall advantage of the game. They have a bunch of strong raiders who contribute to defending as well. On the other hand, UP Yoddha have struggled so far in the tournament. Looking at their current form, there is hardly any doubt that they are a weaker side if compared to the Bangalore squad. Though the battle will surely be intriguing.

Suggested BLR Vs UP Dream11 Team: 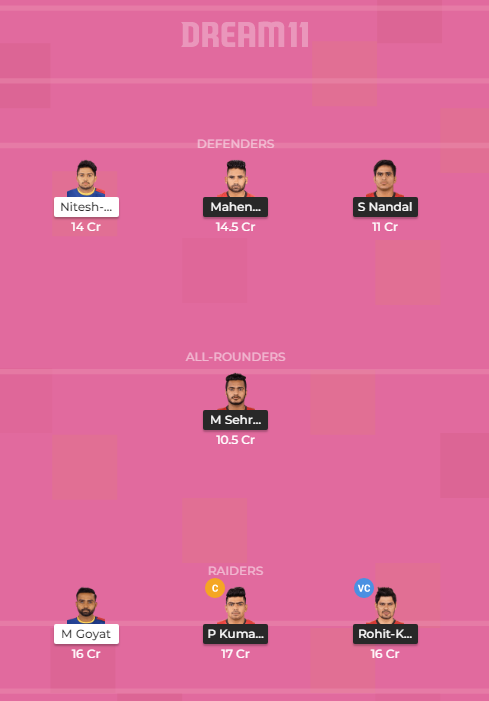 Catch all the live updates of BLR VS UP Kabaddi Match, including live scores and match report. This time BLR VS UP Dream11 Match Prediction will depend on the final team line-ups.