BEI VS HBI Dream11 Prediction: Beijing Guoan will face Hebei CFFC on match-day 21 in the Chinese Super League. As Chinese League moves into its last phase, with just 10 matches remaining, every point becomes very crucial in terms of title and relegation battle.

Beijing Guoan is currently in 3rd position, four points behind Guangzhou Evergrande who sit at the top of the ladder. The Beijing side has their task out in these last 10 games, to go all guns blazing and push for the glory.

Hebei CFFC has struggled to get going this season. They sit in 13th position with 6 points clear of the relegation zone. After defeating Chongqing Lifan, a higher-ranked team by a margin of 3 goals, the players will be confident going into this game.

BEI VS HBI Match Details: The match between Beijing Guoan and Hebei CFFC will be played at Workers Stadium, Beijing.

BEI VS HBI Match Timing: The match will kick off at 5:30 PM IST, 2nd August 2019. The live score and live stream for the Friday evening match between Beijing Guoan vs Hebei CFFC will be available online.

Beijing Guoan
Renato Augusto – The Brazilian is in red hot form this season. He has 9 goals and 6 assists to his name. The 31-year-old likes to cut inside and shoot the ball from distance.
Jonathan Viera – The Spaniard has 8 goals and 6 assists in the season so far. The 29-year-old seems to have formed a partnership with Renato Augusto as the two players often complement each other to devastating effect.

Hebei CFFC
Marcao – The Brazilian has 6 goals and 3 assists in the season. The 6ft 4inch striker has a strong aerial presence which causes trouble to defenders. The 25-year-old is a threat from set-pieces.
Javier Mascherano – Former Barcelona and Liverpool player brings a huge amount of top-flight experience with himself. He has 5 assists to his name in the season. The 35-year-old has played in the midfield position to create chances in the final third. 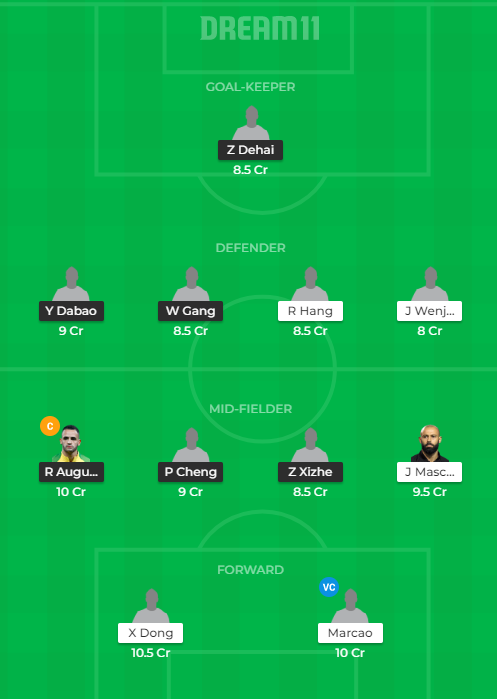 Catch all the live updates of BEI VS HBI Football Match, including live scores and match report. This time BEI VS HBI Dream11 Prediction will depend on the final team line-ups.