BAR vs CEV Dream11 Prediction: Barcelona will host Celta Vigo for its 12th game. The match holds a lot of importance for both the teams. Barcelona will be looking to overcome the defeat it faced in the last game, whereas Celta Vigo will look to break the four-game losing streak.

Many pundits have suggested that Barcelona is losing its fear factor. The defeat against Levante raised a lot of questions on the squad. There have been questions on the team’s strategy to tackle physical pressure. Ernesto Valverde, the Barca coach, is under immense pressure from Media and fans. Another loss could see him losing his job. The Barcelona team currently resides on the 3rd spot with 22 points.

Celta Vigo is having a horrifying campaign in 2019-20. The team is hovering in the relegation zone. Celta Vigo will look to break the four-game losing streak. Celta currently has nine points and is on the 19th spot in the table.

The two teams will face each other in the game scheduled on 11th November. The game will be played in the home ground of Barcelona, Camp Nou. The match will commence at 1:30 PM.

Facebook holds the broadcasting rights of La Liga. The match can be streamed live on facebook.com. Live scores of the game will be available on the official websites.

Lionel Messi: The Argentinian is a magician on the ball. His skills are well known and his capability of changing a game within one moment. Messi missed the initial games due to an injury. Since his return, he has started five games. He has scored five goals and provided four assists.

Antonie Griezmann: He struggled to find his feet after making a move to Barcelona. However, Griezmann has managed to find his form back. He has scored four goals and provided three assists in nine starts.

Denis Suarez: Celta Vigo is struggling in the league. The only player who is looking half decent at the moment is Denis Suarez. He has one goal and one assist under his name in 12 games. His ball control and passing make him a dangerous proposition. 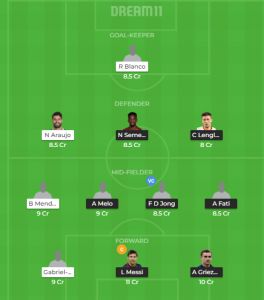