Loughborough Lightning have won two matches out of five played thus far, while Yorkshire Diamonds have only managed to win just one game in the league in four matches.

YD VS LL: Pitch Report
The match between Yorkshire Diamonds and Loughborough Lightning will be played at Haslegrave Ground in Loughborough.  The ground will host its first-ever T-20 match. The team winning the toss is likely to bat first.

YD VS LL: Match Details
The match between Yorkshire Diamonds and Loughborough Lightning will be played at Haslegrave Ground in Loughborough on Sunday. The match will start at 7:00 PM IST.

YD VS LL: Broadcasting Details
Yorkshire Diamonds-Loughborough Lighting match will be telecasted in England only. There is no broadcast or official live stream available in India. Live Score updates though are available.

YD VS LL: Head to Head in last five matches

Skipper Launran Winfield hasn’t impressed too much with her performances in the four matches she featured in the tournament. She has scored 114 runs in four matches at a modest average of 28.5. However, given the class she possesses, she should be must-have in your fantasy eleven.

Arguably, the best bowler in the side, Linsey Smith hasn’t performed up to his potential in the tournament. Linsey needs to step up to the plate if Yorkshire fancy their chances against Loughborough Lightning on Sunday.

Mignon du Preez played a match-winning knock of 70 runs off 41 balls, helping her side win the last match against Surrey Stars by seven wickets. She will be a player to look out for ahead of the game against Yorkshire.

Amy Ellen Jones should go in as the ideal wicket-keeper in the fantasy side. Jones hasn’t taken the world by storm but has been in a decent form. She played a stellar 65-run innings off 53 balls in the game against Western Storm. 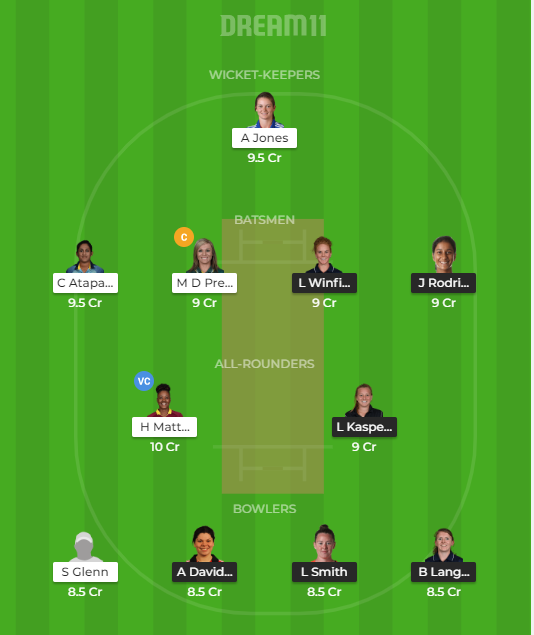 Catch all the live updates of YD vs LL cricket match, including live scores and match report. This time YD vs LL Dream11 Prediction will depend on the final team line-ups.