WI vs AFGH Dream11 Prediction: West Indies and Afghanistan will meet in the second game of the 3-match ODI series which will be played in Lucknow. West Indies is leading in the series by 1-0.

West Indies won the first ODI under the new skipper pollard. Sahi Hope’s 77 and Roston Chase’s 94 helped Windies chase down the target of 194. Chase, Holder, and Shepherd picked 2-wickets each to bowled out Afghanistan on 193. Hetmyer and Lewis’ form is a big concern for Windies. Pollard can try Brendon King in the 2nd game. In bowling, Alzarri Joseph was not up to the mark as his economy was 8.40.

Afghanistan’s first ODI after WC came out as the defeat of 7-wickets. Batting collapse from 152/4 to 193 all-out will be a big concern and it’s happening from the WC. They get a good start from the top-order but eventually, middle-order batsmen waste all the efforts in the end. Rahmat Shah scored 61 and Ikram Ali contributed with 58. The team can make one or two changes in the eleven.

West Indies and Afghanistan game will be played at Bharat Ratna Shri Atal Bihari Vajpayee International Cricket Stadium, Lucknow. The ground is a decent batting surface. It was a collapse in the first innings despite the good batting conditions. This is the surface you can easily get 250 and chasing will be a tough task above 250. It hosted one international game before and it was a high-scoring affair.

West Indies and Afghanistan game will start at 2 PM IST on November 09, 2019.

West Indies and Afghanistan game will be telecasted on Star Sports Select 1. The live score stream will be available on Hotstar.

Hayden Walsh was the leading wicket-taker in CPL 2019. He picked 22 wickets for Guyana. He might be a crucial bowler as he has the good variations and if he gets a turn from the pitch, Walsh can pick 3-4 wickets.

Shai Hope showed his technical approach with a fine knock of 77. He continued his white-ball cricket form here. He starts as an opener and provides the stability to the batting line-up. He put a winning stand with Chase.

Rahmat Shah will be a key player for Afghanistan on this tour. He scored 68 runs in the first game. He was also in good form in Shpageeza Cricket League. Shah might be useful as the 6th bowler as his off-spin control the run-rate and he can also give the breakthroughs.

Asghar Afghan is an experienced player and after the World Cup, he has been so consistent with the bat. He scored 254 runs in Shpageeza Cricket League at an average of 36.28. 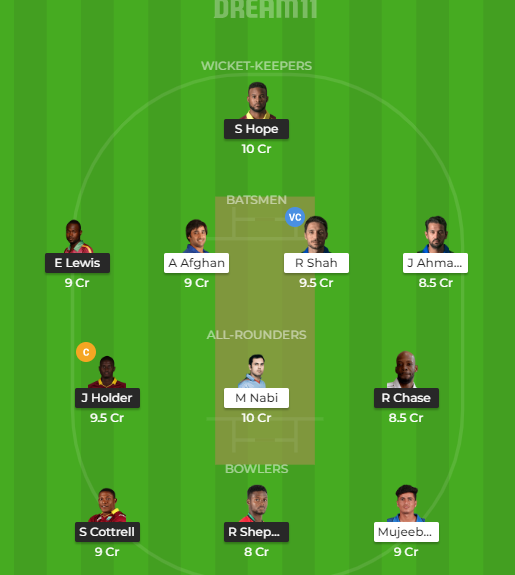