WAS vs ORL Dream11 Prediction: The Eastern Conference basketball match of the NBA 2019-20 regular season will be played between Washington Wizards vs Orlando Magic as Orlando Magic will hit the road for their match up with the home team Washington on Wednesday.

Washington Wizards couldn’t go past through the LA Clippers in their last game as they suffered defeat by the final score of 150-125 in their road game. The Wizards enters this game with a fourth place in the Southeast Division, 7.5 games behind the Miami Heat in the division. The Wizards enter this contest third in the league in scoring offense as they put up an average of 118.8 points per game on the year. Washington is 28th in rebounding as they collect 42.1 boards per contest and are first by dishing out 28.8 assists per contest. The Wizards have been a sieve defensively, ranking 30th in the league in scoring defense by allowing 122.7 points per game. Bradley Beal leads the team with 28 points and 7.3 assists per game on the season. Isaiah Thomas puts up 12.1 points plus 4.9 assists a night while rookie Rui Hachimura adds 13.3 points and 5.6 boards a night. Davis Bertans (13.2 points), Thomas Bryant (13.9 points, 8.5 rebounds) and Moritz Wagner (12 points) are all averaging in double figures. The Wizards need more from Ish Smith, Isaac Bonga, Troy Brown Jr. and Jordan McRae in order for the team to have success.

Orlando Magic enters this contest in second place in the Southeast Division, just six games behind the Miami Heat for the top spot. Orlando managed to outclass Golden State Warriors in their last match as the final score of the match was 100-96. Evan Fournier led the side by scoring 32 points for the side consisting of 3 rebounds. Initially, Orlando’s offense didn’t perform well on the offense side as they failed to score 100 points in their first seven games of the year, but then the offense caught fire, scoring 100 or more in six straight games. The Magic is 30th in the league in scoring offense with 101 points per game so far this season. Orlando is 14th in the league in rebounding with 45.7 boards per contest and 24th with 22.1 assists per game this season. The Magic is second in the league in scoring defense as they allow only 101.9 points per contest. Nikola Vucevic contributes 17.1 points plus 11.6 rebounds per contest this season. Evan Fournier is leading the team with 19.2 points per game this season. Terrence Ross (11.9 points), Markelle Fultz (11.7 points) and D.J. Augustin (8.7 points, 4.7 assists) have contributed in the early going.

WAS vs ORL Dream11 Match Details:

The basketball match between Washington Wizards vs Orlando Magic will be played at the venue Capital One Arena, Washington. The Arena can hold around 20,350 spectators.

WAS vs ORL Dream11 Match Timing and Date:

The basketball match between Washington Wizards vs Orlando Magic will start at 5:30 AM IST on December 4, 2019, Wednesday.

WAS vs ORL Dream11: Broadcasting Details

The basketball match between Washington Wizards vs Orlando Magic will be telecasted in India on the Sony Sports Network. You can also watch it online on the SonyLIV app. Live Score & Streaming will also be available on the NBA official website.

WAS vs ORL Dream11: Team Lineups and squads

WAS vs ORL Team news and updates:

Washington Wizards: Ian Mahinmi (Achilles Tendon) has been sidelined until December 5 and Garrison Mathews will sit out for this game due to leg injury. While Moe Wagner and CJ Miles have been listed day-to-day by the team management.

Orlando Magic: Nikola Vucevic will be out till December 20 due to Ankle injury and Al-Farouq Aminu has been ruled-out till February due to knee injury. While Michael Carter-Williams has been listed day-to-day due to hip injury.

WAS vs ORL Dream11 Team: 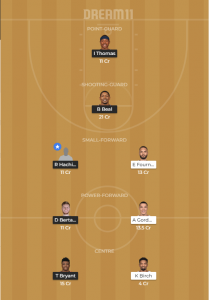 WAS vs ORL match prediction will help you earn money easily. Pick your Dream Team players and play your favorite championships like Head to Head, Hot Contests, Mega Contests, Comeback Contests, Contest of Champions, Winner Takes it All, etc.ll, etc.