USA vs WNI Dream11 Prediction: The 18th match of the Super50 Cup will be played between the United States of America and Windward Island.

The USA are coming off with a defeat against Guyana. Chasing a total of 226 on a tough track, Guyana restricted the USA on 213/9 in 50-overs, resulting in their 2nd defeat of the tournament. The first defeat came against West Indies Emerging side. USA bowled out on just 109 and the Emerging side chased down the target with 6 wickets in hand.

On the other side, Windward Island also lost its last game against West Indies Emerging Team. After a brilliant bowling show by WI Emerging Team, Windward were bowled out for just 154. This match is important for both sides to stay alive in the tournament.

USA and Windward Island game will be played at Brian Lara Stadium, Trinidad. The ground hosted two games this season. In the last game, Windward were bowled out on 154 on a good chase. In another game, Guyana chased down 186 with losing 8 wickets. Chasing might be tricky because the surface gets slow in the second half.

USA and Windward Island game will not be telecasted on any TV platform. The live stream will be available on Windies Cricket’s YouTube channel and Fan Code app.

Monanak Patel is a quality batsman of this side. He scored 308 runs in the previous season at an average of 38.50.

Karima Gore was also in good form in last ICC Division League at home. Karima Gore was leading wicket-taker for USA in last season of Super50 with 16 wickets.

Kavem Hodge played a crucial knock of 57 against Trinbago. He was also in good form in Super50 2018. He scored 275 runs at an average of 39.28. He scored two centuries in first-class and also picked 36 wickets in List-A.

Kirk Edwards had an impressive record in his short career. He scored one ODI and two Test centuries. He is the skipper of Windward Islands and he will be an important player for Dream11. 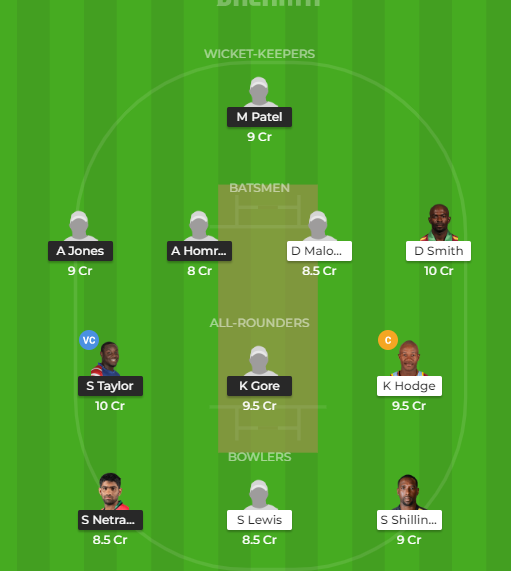