TN vs RJS Dream11 Prediction: Tamil Nadu will be battling it out against an in-form Rajasthan in their second match of the domestic T20 tournament. Both the teams would be coming into the contest on the back of comfortable wins. While Tamil Nadu thrashed the Kerela in their opening encounter by a margin of 37 runs, Rajasthan outwitted Manipur by a margin of 97-runs and would be hoping to emulate the same in what promises to be a nail-biting contest.

The match between Tamil Nadu and Rajasthan will be played at St Xavier’s College Ground, Thiruvananthapuram. The pitch is a batters paradise and any score above 150 could be a par score at this venue.

The match between Tamil Nadu and Rajasthan will be played on November 9, 2019. The match starts at 9:30 AM IST.

The Tamil Nadu-Rajasthan match will be broadcasted on Star Sports Network while the Live Streaming will be available on Hotstar.

The live score and live streaming of Tamil Nadu vs Rajasthan game will be available on Sportzcraazy.

Dinesh Karthik has had a stupendous season with the bat in the recently concluded Vijay Hazare Trophy wherein he emerged as one of the top-performers for Tamil Nadu with over 400 runs to his name. The 34-year-old’s expertise as an aggressive middle-order attacking batsman could prove beneficial for Tamil Nadu in the much-coveted duel.

Baba Aparajith shouldn’t be forgotten when formulating a perfect Dream11 lineup. His 26-ball 35 helped Tamil Nadu gain an upper hand over Robin Uthappa-led Kerala in the opening match of the season. Not to mention, he had a great run in this year’s TNPL which furthermore cements his spot for TN vs RJS Dream11 lineup.

Opener Ankit Lamba shouldn’t be forgotten when formulating a strong lineup from both the units combined. His 41-ball 49 laid the winning foundation for Rajasthan, which along with the assistance of remaining batters proved beneficial for Mahipal Lomror & Co in the much-talked encounter. His aggressive intent from the very first delivery could render a significant advantage to Rajasthan in the forthcoming feud versus Tamil Nadu.

Tanveer-Ul-Haq could prove to be a lethal pick with the ball in the upcoming contest versus Dinesh Karthik & Co. He grabbed a 4-fer in the lately concluded game against Manipur which helped Rajasthan gain a scintillating triumph in their first match of the season. He could be backed to replicate the same in the highly-coveted game against Tamil Nadu in Thiruvananthpuram. 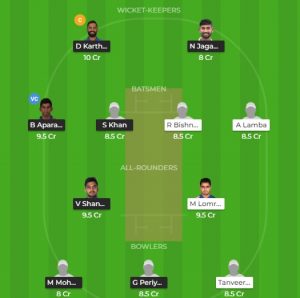