TN vs MUM Dream11 Prediction: A raging Tamil Nadu would lock horns with an in-form Mumbai in what has been presumed by many as the battle of the season. Both the teams possess immense talent on board and will go all guns blazing in the much-coveted encounter the outcome of which could render significant advantage to either unit, considering every contest from this point onwards is a roadway to the semis. For Mumbai, the previous outing against Assam wherein they grappled an 83-run triumph would have significantly boosted their spirits. Tamil Nadu, on the other hand, will aim to rectify their mistakes committed in the match against Karnataka which cost them a 9-wicket defeat at the hands of Manish Pandey & Co.

TN vs MUM Match Details & Live Streaming: The Group B Super League match between Mumbai and Tamil Nadu will take place on November 22 at CB Patel International Cricket Stadium, in Surat. The match will begin from 1:30 PM onwards with live telecast available on Star Sports Network and live streaming on Hotstar. Live Scores and scoreboard details will be available on official websites.

Dinesh Karthik has had a phenomenal run so far with top-notch performances in almost every single domestic T20 duel. The previous outing versus Karnataka witnessed the wicket-keeper batsman score 29-ball 43 comprising 5-fours and a sole six which assisted his side in putting 150+ runs on board. For his consistent exhibitions throughout Syed Mushtaq Ali 2019, one could back him up as a captain/vice-captain for the coming duel.

Vijay Shankar has been highly impressionable in the concurrent edition of Syed Mushtaq Ali contests. His all-round potency has been a vital contributor to Tamil Nadu’s victory in the matches played so far and taking into account his present form, one shouldn’t be surprised if the 28-year-old manages to deliver ripping exhibition in the coming duel.

Suryakumar Yadav will remain a certain pick for TN vs MUM Dream11 lineup.  In 6 innings played so far, the Mumbai skipper has amassed 208 runs while playing at an average and strike rate of 52.00 and 158.77 respectively. Not to mention, he has single-handedly turned the games in Mumbai’s favor on quite a few occasions in the ongoing T20 tournament and could be backed to put up a stellar show in the coming feud.

Aditya Tare will look to capitalize on the momentum that he has acquired in the recently concluded feuds. The wicket-keeper batsman scored 48-ball 82 in the game against Assam and emerged as the top-performer for Mumbai as far as batting was concerned. His wicket-keeping potency shouldn’t be forgotten for he could garner decent fantasy points while keeping the gloves. 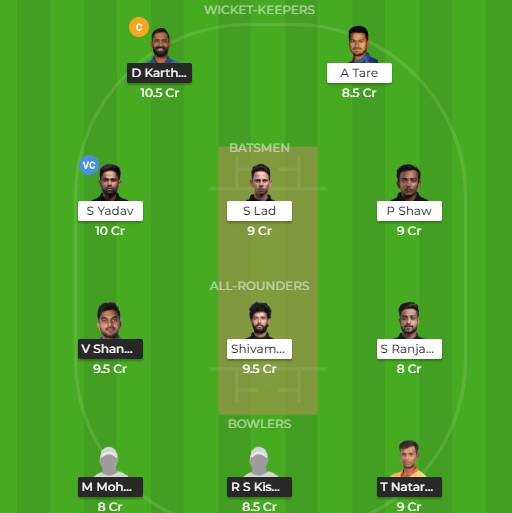