RJS vs HAR Dream11 Prediction: An in-form Haryana would be squaring off with an equally competitive Rajasthan in the Group A Super League match, the winner of which could get a considerable advantage as the tournament progresses further. The Amit Mishra-led side are coming on the back of a 99-run victory versus Meghalaya and will look to emulate a similar show in their first match of the Super League stage.

On the other hand, Rajasthan suffered a 15-run defeat at the hands of Baroda in their opening encounter of Super League stages and would look to get back their winning momentum in the coming duels.

The Group A Super League match between Rajasthan and Haryana is scheduled to take place on November 22 at CB Patel International Cricket Stadium, in Surat. The match will commence from 9:30 AM (IST) onwards with live streaming available on Hotstar and live telecast available on Star Sports Network.

Ankit Lamba has been in great form off late in the ongoing edition of Syed Mushtaq Ali Trophy. In fact, the previous outing against Baroda witnessed the opener score 37-ball 54 comprising 5-fours and 2-sixes which unfortunately went in a losing cause. Nevertheless, one shouldn’t shy away from backing him as a captain/vice-captain for the coming contest.

Arjit Gupta had a ripper of a day in the previous game against Baroda wherein he bashed 21-ball 41 comprising 2-fours and 3-sixes which aided his side in getting close to the opposition total. The 30-year-old’s ability to go berserk when batting in the middle is something that could reap benefits to Rajasthan in the coming duel.

Harshal Patel‘s all-round heroics were the prime contributors to Haryana’s majestic triumph in the previous game against Meghalaya. The 28-year-old scored 40-ball 82 with the bat comprising 5-fours and 7-sixes in the first innings and scalped figures of 4-0-22-3 in the second innings, eventually resulting in the Amit Mishra-led lineup acquire a 99-run victory over Meghalaya.

Rahul Tewatia remains a valuable pick in RJS vs HAR Dream11 lineup. His quick-fire 16-ball 31 assisted Haryana in getting past the 200 run mark in the first innings versus Meghalaya which was followed by a ripping bowling figure of 0.3-0-6-2 that swept the opposition’s tail. 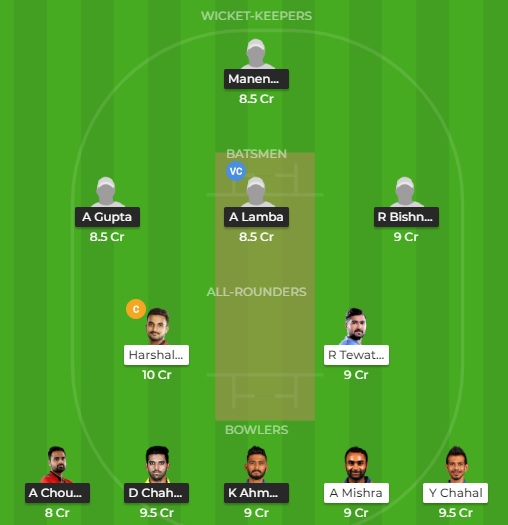