RBK vs DYM Dream11 Prediction: Rubin Kazan will host Dynamo Moscow for a mid-table clash on 9th November. The two teams have played well in midfield and defense, but the struggle in the attacking department is well known. Kazan has managed just eight goals in 15 games, whereas Dynamo has managed 11 in the same number of games.

Rubin Kazan is on the 12th spot on the table with four wins in 15 games. Rubin has 17 points and they also have managed five draws.

On the other hand, Dynamo has 15 points from 15 games. The Dynamo team has managed three wins and six draws. Dynamo is one spot below Rubin on the 13th.

Evgeny Bashkirov: Evgeny has played the role of an anchor in the midfield for Rubin Kazan. The Russian central midfielder has scored one goal. He also has managed one assist and has been directly involved in 25% goals Rubin has scored. Bashkirov has a pass accuracy of 77%. He will play a pivotal role if Rubin wants to defeat Dynamo Moscow.

Maximilian Philip: Philip has played an essential role in Dynamo’s attack. The German forward has made seven appearances and scored two goals for the side. Philip will be pivotal if Dynamo wants to defeat Rubin’s team, which they have failed to beat in the past 12 games. 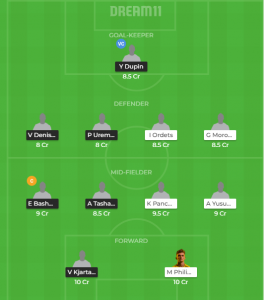