MR-W vs BH-W Dream11 Prediction: This will be the 38th match of the Women Big Bash League, where Melbourne Renegades and Brisbane Heats will lock horns at the Junction Oval, Melbourne.

For all Dream 11 viewers, we have come up with the match details, broadcast details. Team preview, pitch report, line ups, squads, key players and Dream 11 team of the match.

Melbourne Renegades and Brisbane Heats Women game will be telecasted on Sony Six. The live stream will be available on Sony Six.

Brisbane Heat is at the top of the position with 7 wins under the belt. After 5 back to back wins Brisbane Heats are on a roll and will look to continue their domination on the points table.

Beth Mooney has been the star performer for Brisbane Heats in the last 10 innings, she has scored 523 runs in 10 innings at an average of 87.17.

The match will be played at Junction Oval, Melbourne, the Oval pitch offers true bounce off the pitch making the batsman life miserable early in the innings, but once the batsman passes the struggling period, he can compile big marathon innings. The team winning the toss should bat first.

Danielle Wyatt- She may not be a brutal slogger, but her control on the game is unchallenged. She is given the role of sheet anchor and is managing it quite well. She has scored 280 runs in 9 innings at an average of 40.00 and a strike rate of 117.15.

Molly Strano- Molly Strano is the bowling pillar of Melbourne Renegades. She has bagged 13 wickets in 9 matches and is already among the top 4 wicket-takers of the season.

Beth Mooney- The top-order batswoman has become the synonym of consistency, she not anchors the innings throughout, but is also capable of slogging the bowlers out of the park at any point of time.

Jes Jonassen-  Jes Jonassen is not only the highest wicket-taker for Brisbane Heats, but also tops the list of most wickets this season. She has bagged 16 wickets in 10 matches that also includes 3 four-wicket haul. 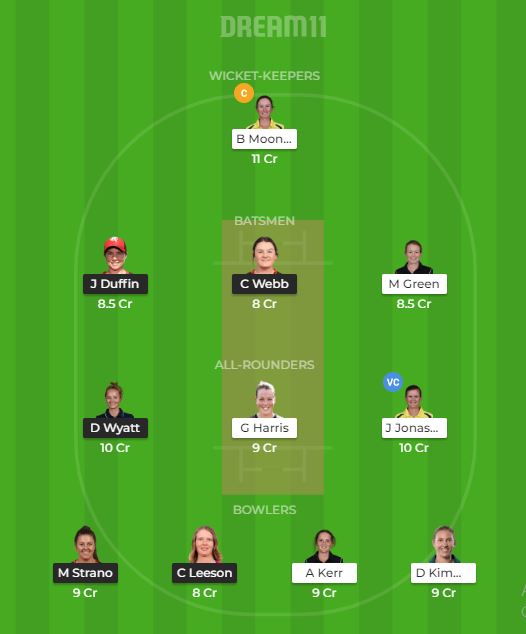