LYC vs TUT Dream11 Prediction: Lyva Kovai Kings and Tuti Patriots will play each other in the 8th match of Tamil Nadu Premier League Season 4. Tuti Patriots had a bad start as they lost against defending champions Madurai Panthers by 9 wickets, while Lyva Kovai Kings won their first game by 8 wickets against VBK. Washington Sundar’s availability is still unknown, but he is likely to play this game.

The cricket match between Lyva Kovai Kings and Tuti Patriots will be played at NPR College Ground. The ground will host the majority of the games this year. The pitch is a good batting surface but at times, becomes slow in the second innings, and the average score on NPR Ground stands at 165.
LYC chased a 150 plus total in 15 overs on the same ground, giving an indication that the pitch is slowly starting to give help to the batsmen as the tournament progresses.

The cricket match between Lyva Kovai Kings and Tuti Patriots will be played at NPR College Ground.

The Lyva Kovai Kings and Tuti Patriots match will be played on July 25, 2019, at 7:15 PM IST. The match will be telecasted on Star Sports Network. Live Score updates and Live stream will be available on Hotstar.

Abhinav Mukund – Abhinav Mukund is captaining LYC and is the key player for the team. He led the chase against VBK by playing a knock of 70 off 44 balls and finished the game in just 15 overs. He has a good record in previous seasons of Tamil Nadu Premier League as well.
Shahrukh Khan – Shahrukh Khan is a dashing opening batsman of LYC. He made quick 40 off 21 in the chase against VBK, laying the perfect foundation for the batsmen to come. He scores quick runs in T20 and could be a vital cog in the side.

A Davidson – Davidson can make a strong comeback after the bowling failure of his team. He was the strike bowler in last season of TNPL, where he picked 13 wickets in 7 matches with the average of 19.23. He was the 2nd highest wicket-taker of last season. He would look to bring that form into the game.
Washington Sundar – Sundar is a quality spinner and an effective batsman in T20s, having the ability to play at the top as well in the lower order. His availability is unknown for this game, but should he play, he can be the real deal for Tuti Patriots. 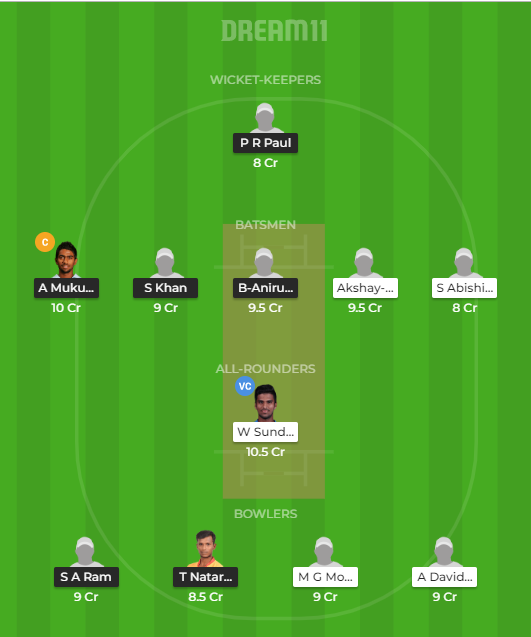