The Lakers have hit a new high this season. After making their best start this decade, they have now added a nine-game unbeaten streak to that, giving them a sensational 16-2 season record to date. They beat the New Orleans Pelicans 114-110 in their previous game. In the last game, Anthony Davis returned to play against New Orleans with a terrific performance that saw him score 41 points. LeBron James scored 15 points in the fourth quarter to finish with 29 points and 11 assists. Kyle Kuzma chipped in with 16 points. The Lakers overcame a 10-point deficit and outclassed the Pelicans. King LeBron James also became the fourth player in the NBA history to surpass 3000 points. The Lakers have been quite solid on both ends of the court, an indicator they’ve found a way to win both ways. They have scored an average of 112.2 points per game and allowed 103 a game.

The Wizards started the season sluggishly, but have since found part of their momentum with three wins in their previous five wins to move to 6-10 for the season. They are the league’s best shooting team in terms of points scored (119.4 PPG). The Wizards continued to build on their high-scoring games with another one against the Phoenix Suns, beating them 140-132. Bradley Beal led the Wizards with 35 points, consisting of 2 rebounds and 6 assists. Followed him Thomas Bryant with his wonderful 23 points in the match. Currently, with just 6 wins, Wizards find themselves at the 9th place in the Eastern Conference. In order to tackle the likes of the King LeBron James and Anthony Davis, the Wizards will have to perform well in the defense side.

LAL vs WAS Dream11 Match Details:

The basketball match between Los Angeles Lakers vs Washington Wizards will be played at the venue Staples Center, Downtown Los Angeles. The Arena can hold around 21,000 spectators.

LAL vs WAS Dream11: Match Timing and Date

The basketball match between Los Angeles Lakers vs Washington Wizards will start at 9:00 AM IST on November 30, 2019, Saturday.

LAL vs WAS Dream11: Broadcasting Details

The basketball match between Los Angeles Lakers vs Washington Wizards will be broadcasted in India on the Sony Sports Network. You can also Livestream it online on the SonyLIV app. Live Score & Streaming will also be available on the NBA official website.

LAL vs WAS Dream11: Team Lineups and squads

LAL vs WAS Team news and updates:

Los Angeles Lakers: Anthony Davis who had sustained shoulder injury is listed day-to-day for this game while Avery Bradley is expected to play this game as he was rested because of lower leg injury.

LAL vs WAS Dream11: Team news and updates

LAL vs WAS Dream11 Dream Team: 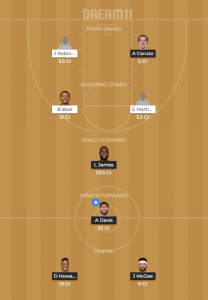 LAL vs WAS match prediction will help you earn money easily. Pick your Dream Team players and play your favorite championships like Head to Head, Hot Contests, Mega Contests, Comeback Contests, Contest of Champions, Winner Takes it All, etc.ll, etc.