The Clippers are coming off with a victory over the Washington Wizards by 25 points as the final scorecard was 150-125. By doing this they managed to rise above the two-match losing streak. By winning this game against the Portland in this match, Clippers will be winning their second consecutive game against Portland. In the victory against Wizards, Shooting Guard Kawhi Leonard led his side by scoring 34 points and six rebounds followed by Paul George who finished with 31 points and eight rebounds, while Montrezl Harrell added 23 points and 15 rebounds in the winning cause. Offensively Los Angeles has the fifth-best offense in the league, averaging 115.4 points per game as they scored a massive 150 points against Washington Wizards. Los Angeles has also played well defensively, holding opponents to 108.3 points per game. They gave up 125 points in their last game and will need to play better if they want to beat the Trailblazers.

The Portland Trail Blazers are on the road for a match-up with the Los Angeles Clippers. The Trail Blazers has won 8 matches and lost 12 of them till now, but a bright side for Portland is they are entering this contest after having won 3 consecutive matches in a row. The Trail Blazers defeated Chicago Bulls by 107-103 points as the contest went very close. Damian Lillard led the Blazers with 28 points and six assists in the match followed by Carmelo Anthony, who was named the Western Conference Player of the Week, added 23 points (11 rebounds and four assists), while CJ McCollum finished with 20 points and seven rebounds for the Blazers. Portland has played well offensively, averaging 113.6 points per game. The team is shooting 45 percent from the field and 36 percent from three-point range. They finished with 107 points against Chicago in their last game but will need to play better to beat the Clippers. Talking about the defense of the side, Portland has struggled a bit giving up 114.7 points per game as they were able to stop the Bulls at 103 points in their last game.

The basketball match between Los Angeles Clippers vs Portland Trail Blazers will be played at the venue Staples Center, Downtown Los Angeles. The Arena can hold around 21,000 spectators.

The basketball match between Los Angeles Clippers vs Portland Trail Blazers will start at 8:30 AM IST on December 4, 2019, Wednesday.

The basketball match between Los Angeles Clippers vs Portland Trail Blazers will be telecasted in India on the Sony Sports Network. You can also watch it online on the SonyLIV app. Live Score & Streaming will also be available on the NBA official website.

Los Angeles Clippers: Landry Shamet (ankle injury) and Rodney McGruder (hamstring) have been ruled out till December 8 due to their injuries while JaMychal Green (back) and Amir Coffey (ankle) has been listed day-to-day by the team for this game.

Portland Trail Blazers: Zach Injury is expected to be out till March due to shoulder injury. While Gary Trent Jr. has been listed day-to-day by the team for this game. 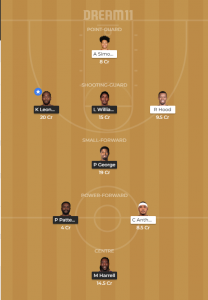