ENG VS NZ Dream11 Prediction: The Fifth and final match of the 5-match T-20 series will be played between New Zealand and England on Sunday. The series is currently levelled at 2-2 as both teams are expected to come hard in a bid to lift the series.

Keeping in mind that most of the senior English players have been rested in the series, the scoreline of 2-2 highlighted England’s prowess in T-20 cricket. The visitors have given a tough fight to the hosts, winning two matches out of 4.

England’s skipper Eoin Morgan has led from the front, playing a couple of outstanding knocks in the series, while the likes of David Malan and James Vince have also put on a great show, making a case for them ahead of the T20 world cup in Australia. Chris Jordan has been leading the bowling department by example even as Sam Curran and Parkinson are also amongst the wickets.

The home team haven’t found it easy clinching the series, having won two games out of four. After suffering a humiliating 76-run defeat, New Zealand would be keen to make a comeback and lift the series. The onus will be on the opening pair of Martin Guptill and Colin Munro to give a good start, while the middle-order batsmen with the likes of Colin De Grandhomme and Ross Taylor need to showcase their power-hitting abilities one last time in order to lift the series.

The match between England and New Zealand will be played at Eden Park, Auckland on Friday. The game starts at 6:30 am IST. One of the largest grounds in New Zealand, the boundaries would be hard to come by. Nevertheless, the pitch is batting friendly and thus a high scoring game is expected to be on the cards.

The match will be broadcasted on Sony Television Network. The live stream will also be available on Hotstar.

Eoin Morgan played a sensational 41-ball 91 run innings, which included seven fours and seven sixes. His knock propelled England to 241 in 20 overs, helping his side win the match by 76 runs.

The 32-year old cricketer has been sensational in the series, boasting of scores like 39, 55, and 103. He scored an outstanding 103 runs knock off 51 balls in the last match as he will also be one of the biggest bets in the final match.

The New Zealand all-rounder has been playing exceptionally in the series. A lot of credit should be given to De Granhomme for New Zealand’s two wins in the series. He boasts of scores likes 28(12) and 55 (35) in second and third T-20 Internationals respectively.

The left-arm spinner has been the leading wicket-taker for New Zealand in the series. He has picked 9 wickets in four matches he has played in the series. 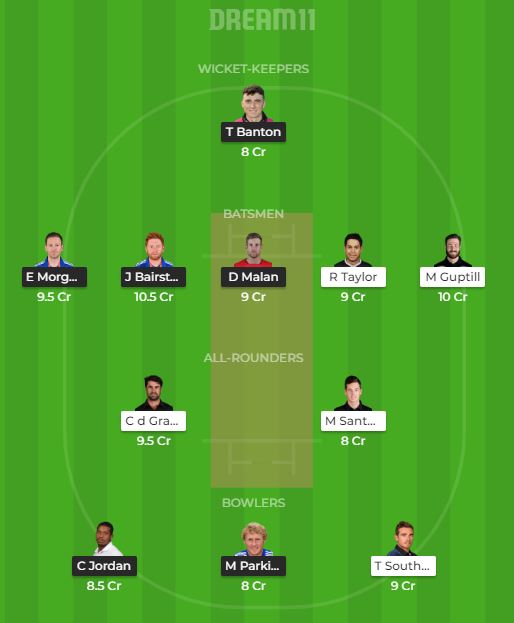