With a win over Cleveland Cavaliers by 127-94, Detroit Pistons registered their eighth win of the regular season as the Pistons were guided by Blake Griffin who scored 24 points for the side consisting of 4 rebounds and 1 assist. Pistons have won 8 games and lost 13 games so far. The Pistons are third in the Central Divison 10.5 games behind the Milwaukee Bucks in the standings. Detroit Pistons currently have maintained the record of  6 wins and 4 losses at home in the regular season. Pistons average 112.6 points per game, which is better than their season average of 108.2 points per game. The Pistons allow 105.8 ppg at home this season, which is better than their full-season mark of 108.7 points per game. Pistons enter this contest 19th in the league in scoring offense with 108.2 points per game on the season. Detroit stands 25th in rebounding with 42.7 boards per contest and tied for 9th with 25.1 assists per game. The Pistons are just above the middle of the pack in scoring defense, ranking 14th by allowing 108.7 points per game. Andre Drummond is second on the team with 17 points, 17 rebounds, 1.5 steals and 1.8 blocks per game. Derrick Rose contributes 16.3 points plus 5.6 assists a night while Luke Kennard chips in 16.9 points per game. Blake Griffin has averaged 18.5 points plus 4.8 boards a contest since returning to the lineup.

Milwaukee Bucks is entering this contest with a comfortable victory over the New York Knicks by 132-88 in their home contest. Milwaukee registered their 12th consecutive win as they stay atop the Eastern Conference. The Bucks is entering this game by also holding the top spot in the Central Division by 4.5 games over Indiana Pacers. In the victory over the Knicks, Giannis Antetokounmpo led the Bucks with 29 points and 15 rebounds in only 22 minutes of action during the game. Meanwhile, Bucks are 1st in the league in scoring offense with 120.8 points per game on the season. The Bucks are 13th in the league in scoring defense as they allow 108.4 points per contest this season. Giannis Antetokounmpo leads Milwaukee with 30.8 points, 13.4 rebounds and 5.8 assists per contest this season. Khris Middleton chips in 17.4 points plus 5.4 rebound a night while Brook Lopez contributes 10.7 points a contest. Eric Bledsoe (15.3 points, 5.6 assists) are solid secondary options for the side.

The basketball match between Detroit Pistons vs Milwaukee Bucks will be played at the venue Little Caesars Arena, Detroit. The Arena can hold around 20,300 spectators.

The basketball match between Detroit Pistons vs Milwaukee Bucks will start at 5:30 AM IST on December 5, 2019, Thursday.

The basketball match between Detroit Pistons vs Milwaukee Bucks will be telecasted in India on the Sony Sports Network. You can also watch it online on the SonyLIV app. Live Scores & Streaming will also be available on the NBA official website.

Milwaukee Bucks: Sterling Brown (Shoulder injury) and Brook Lopez (Back Injury) have been listed day-to-day by the team and their inclusion will be decided just before the match. 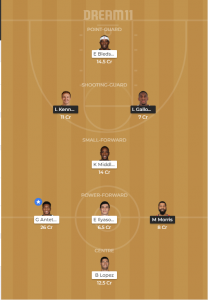