BOD vs AS Dream 11 Prediction: Shpageeza Cricket League is going on in Afghanistan and the 8th match of this tournament will see Amo Sharks taking on Boost Defenders. Sharks made a good start, defeating the Speed Ghar Tigers by 18 runs but lost the next game. Sharks will be led by Shapoor Zadran in third game in the absence of Rashid Khan. Gulbadin Naib’s Boost Defenders had a tough start as they lost their first game by just three runs against Mis Ainak Knights.

BOD vs AS Dream 11 Pitch Report

Amo Sharks and Boost Defenders game will be played at Alokozay Kabul International Cricket Ground. The track is a pure batting paradise. The surface has some help for spin as the pitch gets slow in the second half. Chasing is a tricky call on this track. Batting first will have an advantage.

BOD vs AS Time Details

BOD vs AS Broadcasting Details

Amo Sharks and Boost Defenders game will not be telecasted in India. Live scores are available on Sportz Craazy.

BOD vs AS Squads

BOD vs AS Probable XI

BOD vs AS Dream 11 Best Players

Ibrahim Zadran is having good numbers in T20s. He is a young talent and scored 62 in the last game against Band-e-Amir Dragons.

Zazai is a quality batsman and scoring runs in the domestic circuit. He scored 49 runs in the first game against Speen Ghar Tigers.

Brendon Taylor is the class player and is in good form. He is scoring quick runs in T20s. In the first match against Mis Ainak Knights, he scored quick 36 runs.

Captain: B Taylor, I Zadran

BOD vs AS Dream 11 Dream Team 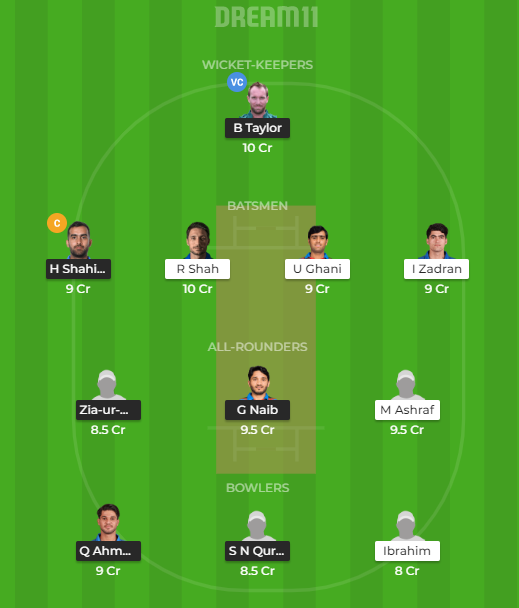