Milano has a chance to go past FC Barcelona and also Anadolu Istanbul if they win this match against the Anadolu Efes Istanbul in their home arena on Friday. Milan fans will know that their team has to watch out for Efes forward Krunoslav Simon, who was a double-digit scorer for two seasons with their team before he made the move to Istanbul in 2017. But they’ll also be happy to note that Simon was scoreless at Mediolanum Forum in his only trip back to Milan this season. Milan has been missing Arturas Gudaitis as he is questionable for this match against the Efes too. In Gudaitis’s absence, Kaleb Tarczewski and Paul Biligha will have to take up the role of the center player. Currently, Milan is the runaway EuroLeague leader in three-point shooting efficiency, making 44.5% from the arc, and when that happens at home, the hosts will be hard to beat.

Anadolu also fighting for a place for the number one position will have to beat Milano in the upcoming contest. The side would be traveling without their center player Bryant Dunston who is still injured and won’t be a part of the round 10 match up. In his absence, Vasilije Micic and Shane Larkin will have to step up to keep the balance of the playing squad strong. In fact, they rank among the EuroLeague top seven scorers, but their defense on the perimeter might be more of a key in the match against the Milano. At the same time, they would go all out against the Milano defense forcing Milan to defend every inch of the court. Vasilije Micic leads the scoring of his side with 18.1 points and 6.8 assists on average. He would be a key player during the match.

The basketball match between AX Armani Exchange Milan vs Anadolu Efes Istanbul will be played at the venue Mediolanum Forum, Assago, near Milan, Italy.  The arena can hold up to 12,700 spectators.

The basketball match between AX Armani Exchange Milan vs Anadolu Efes Istanbul will start at 1:15 AM IST on November 22, 2019.

The broadcasting of the match between AX Armani Exchange Milan vs Anadolu Efes Istanbul will be available on EuroLeague.TV. Live Scores are also available on euroleague.net official website. Television broadcasting isn’t available in India.

AX Armani Exchange Milan: No such news of injury or suspension coming from the team dugout for the upcoming match.

Anadolu Efes Istanbul: Bryant Dunston who was ruled out in round 9 might this game of round 10. No other news of injuries or suspension coming from the team dugout. 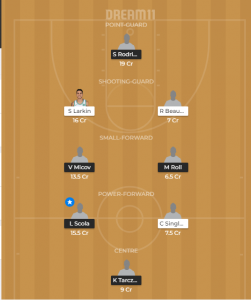